Could a green new deal turn South Korea from climate villain to model?

A year ago, Soyoung Lee was one of a crowd of climate activists demonstrating on the streets of Seoul in a campaign inspired by the global school strike founder Greta Thunberg.

Today, the 35-year-old lawyer is the youngest member of the South Korean parliament and a driving force in the government’s green new deal, which aims to create millions of jobs in renewable energy and help the economy recover from the coronavirus lockdown.

Lee’s transformation highlights how much progress the global wave of youth climate activism has made in a remarkably short space of time. It also raises hopes that South Korea – a country long considered one of the world’s worst climate villains – will set a global example by accelerating the shift away from fossil fuels.

Lee was invited to stand as a candidate for the president Moon Jae-in’s Democracy party in last month’s legislative elections. She proposed a green new deal in the campaign manifesto as a way to appeal to young voters. 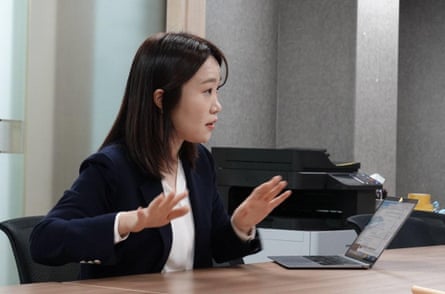 “I was the first to suggest that,” she said. “I want to decarbonise Korean society. This is my personal mission. That is why I went into politics.”

Winning her seat in a landslide, she is now part of a ruling coalition with a huge majority to push through any measures it chooses.

The government’s priority is to boost the economy after the Covid-19 crisis. South Korea has won praise around the world for its handling of the health pandemic, but its powerful industrial conglomerates have taken a big hit from the downturn in global trade.

Many business leaders and veteran ministers want recovery to focus purely on digital technology. But civil society and lawmakers like Lee have persuaded the president that it is possible to create jobs and raise climate ambitions.

For the president, the priority is job creation and demonstrating to the world that South Korea is a responsible member of the international community.

Recent history gives cause for scepticism. This high-tech nation has a low-grade energy supply. After the 2008-09 financial crisis, the government promised a “green growth” strategy, but the plans for more river protection and bike lanes were an excuse for construction companies to pour more concrete than ever.

In the years since, coal use and carbon emissions have surged. The country is calculated to have $106bn of fossil fuel assets incompatible with the Paris climate agreement – more than any other nation. In 2016, activists described South Korea as the world’s biggest carbon villain.

Analysts say this time is different because the president has already set a goal of raising the share of electricity coming from renewables from 3% to 20% by the end of the decade. That will require an investment of about 100tn Korean won (GBP66bn).

Byunghwa Han, a senior analyst at Eugene Investment and Securities and a longtime advocate of renewables, said the political stars were now finally aligned.

“I am very optimistic. This is the best opportunity in Korea since I have been involved in this field since 2008,” he said. “The government is very ambitious about the green new deal and, with a strong majority in the national assembly, the president can enact policies with no roadblocks.”

Lee vowed to prevent a repeat of the last greenwashing project. “Today is totally different. In our green new deal, the starting point is the reduction of emissions,” she said. “We need to legislate measures for a 2050 net zero goal, phase out coal earlier and enhance our ambitions for renewable energy.” 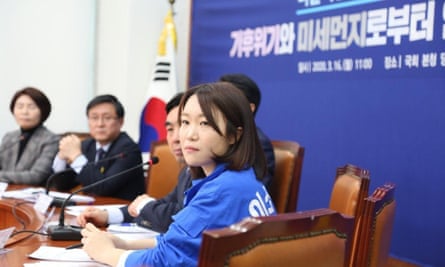 The central test of the government’s convictions will be cuts to domestic coal consumption and overseas financing of coal projects. South Korea plans to generate 30% of its electricity from this dirtiest of fossil fuels by 2030. Lee says this would make it impossible to reach the net zero goal by 2050.

South Korea could make a still greater contribution to global climate efforts if it halted support for coal plants in south-east Asia. It is one of only three nations – along with China and Japan – that still provide loans for such projects, which are blackballed by most nations and a growing number of international financial institutions.

“If we stop this funding, it will show the transition in our country and across the global community,” Lee said. “We need to give up on sectors that make short-term profit.”

The companies that have the most to lose, including the power utility Kepco and the heavy engineering conglomerate Doosan, are already pushing back. Local media report heated disputes among ministers, who say coal is important for developing nations.

Lee argues South Korea will have more stranded assets the longer it delays transition away from fossil fuels. “It makes economic sense to change. These kinds of businesses will not be viable in the future.”

In the coming weeks, the green new deal will dominate discussions of the new session of the national assembly, another sign of how far the climate has moved up the political agenda.

Lee credits the school strike movement for raising awareness. She has campaigned for decarbonisation for many years and worked as a lawyer on climate litigation suits, but she says there was little public support until recently.

“I was a minority in civil society, but the global school strikes sparked a lot of activism in Korea,” she said. “Greta [Thunberg] inspired Korean youth. Last October we had a climate emergency demonstration with 5,000 people. That was the biggest so far. There was also a big one in May. I join them them all the time.”

Her journey from the streets and the courtroom to the corridors of power is a sign of how Generation Greta is coming of age. Lee says there is still a long way to go.

She estimates that just 10 of the 300 legislators are seriously committed to climate issues. “It is definitely still not mainstream,” she said. “But the green new deal is now at the centre of political discussion for the first time. We need to see whether this means a sudden revolutionary change or the start of something incremental.

“I am not going to be over optimistic about securing a tremendous budget with huge goals. But it is important that the government is setting targets and moving in the right direction.There is a lot of value in that. We will do our best to make South Korea a model in this, as it has been in its handling of Covid.”

Robot dolphins: the cruelty-free GBP20m ‘animal’ you can’t tell from the real thing

Planet of the apex: test your shark knowledge with our fin-tastic quiz