Robin Wall Kimmerer: ‘People can’t understand the world as a gift unless someone shows them how’

his is a time to take a lesson from mosses,” says Robin Wall Kimmerer, celebrated writer and botanist. Her first book, published in 2003, was the natural and cultural history book Gathering Moss. She grins as if thinking of a dogged old friend or mentor. “What is it that has enabled them to persist for 350m years, through every kind of catastrophe, every climate change that’s ever happened on this planet, and what might we learn from that?” She lists the lessons “of being small, of giving more than you take, of working with natural law, sticking together. All the ways that they live I just feel are really poignant teachings for us right now.”

It’s the end of March and, observing the new social distancing protocol, we’re speaking over Zoom – Kimmerer, from her home office outside Syracuse, New York; me from shuttered South Williamsburg in Brooklyn, where the constant wail of sirens are a sobering reminder of the pandemic. The occasion is the UK publication of her second book, the remarkable, wise and potentially paradigm-shifting Braiding Sweetgrass: Indigenous Wisdom, Scientific Knowledge, and the Teachings of Plants, which has become a surprise word-of-mouth sensation, selling nearly 400,000 copies across North America (and nearly 500,000 worldwide). In January, the book landed on the New York Times bestseller list, seven years after its original release from the independent press Milkweed Editions – no small feat.

A mother of two daughters, and a grandmother, Kimmerer’s voice is mellifluous over the video call, animated with warmth and wonderment. Her delivery is measured, lyrical, and, when necessary (and perhaps it’s always necessary), impassioned and forceful. She laughs frequently and easily. Today she has her long greyish-brown hair pulled loosely back and spilling out on to her shoulders, and she wears circular, woven, patterned earrings. Behind her, on the wooden bookshelves, are birch bark baskets and sewn boxes, mukluks, and books by the environmentalist Winona LaDuke and Leslie Marmon Silko, a writer of the Native American Renaissance.

“Sitting at a computer is not my favourite thing,” admits the 66-year-old native of upstate New York. Our original, pre-pandemic plan had been meeting at the Clark Reservation State Park, a spectacular mossy woodland near her home, but here we are, staying 250 miles apart. A distinguished professor in environmental biology at the State University of New York, she has shifted her courses online. It’s going well, all things considered; still, not every lesson translates to the digital classroom. For one such class, on the ecology of moss, she sent her students out to locate the ancient, interconnected plants, even if it was in an urban park or a cemetery. To collect the samples, one student used the glass from a picture frame; like the mosses, we too are adapting. 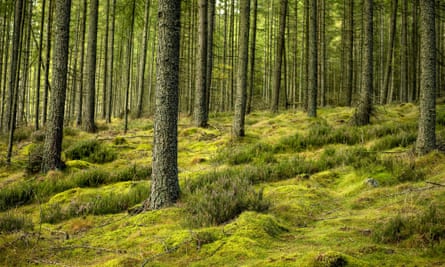 “Most people don’t really see plants or understand plants or what they give us,” Kimmerer explains, “so my act of reciprocity is, having been shown plants as gifts, as intelligences other than our own, as these amazing, creative beings – good lord, they can photosynthesise, that still blows my mind! – I want to help them become visible to people. People can’t understand the world as a gift unless someone shows them how it’s a gift.”

In her debut collection of essays, Gathering Moss, she blended, with deep attentiveness and musicality, science and personal insights to tell the overlooked story of the planet’s oldest plants. For Braiding Sweetgrass, she broadened her scope with an array of object lessons braced by indigenous wisdom and culture. From cedars we can learn generosity (because of all they provide, from canoes to capes). From the creation story, which tells of Sky woman falling from the sky, we can learn about mutual aid. Sweetgrass teaches the value of sustainable harvesting, reciprocal care and ceremony. The Windigo mindset, on the other hand, is a warning against being “consumed by consumption” (a windigo is a legendary monster from Anishinaabe lore, an “Ojibwe boogeyman”). Ideas of recovery and restoration are consistent themes, from the global to the personal.

I think about grief as a measure of our love, that grief compels us to do something, to love more

In one standout section Kimmerer, an enrolled member of the Citizen Potawatomi Nation, tells the story of recovering for herself the enduring Potawatomi language of her people, one internet class at a time. (It’s meaningful, too, because her grandfather, Asa Wall, had been sent to the Carlisle Indian Industrial School, notorious for literally washing the non-English out of its young pupils’ mouths.) The resulting book is a coherent and compelling call for what she describes as “restorative reciprocity”, an appreciation of gifts and the responsibilities that come with them, and how gratitude can be medicine for our sick, capitalistic world.

In the years leading up to Gathering Moss, Kimmerer taught at universities, raised her two daughters, Larkin and Linden, and published articles in peer-reviewed journals. (A sample title from this period: “Environmental Determinants of Spatial Pattern in the Vegetation of Abandoned Lead-Zinc Mines.”) Writing of the type that she publishes now was something she “was doing quietly”, away from academia. But she chafed at having to produce these “boring” papers written in the “most objective” scientific language that, despite its precision, misses the point. What she really wanted was to tell stories old and new, to practice “writing as an act of reciprocity with the living land”. Through soulful, accessible books, informed by both western science and indigenous teachings alike, she seeks, most essentially, to “encourage people to pay attention to plants”. And she has now found those people, to a remarkable extent.

“I’ve never seen anything remotely like it,” says Daniel Slager, publisher and CEO of the non-profit Milkweed Editions. He describes the sales of Braiding Sweetgrass as “singular”, “staggering” and “profoundly gratifying”. Since the book first arrived as an unsolicited manuscript in 2010, it has undergone 18 printings and appears, or will soon, in nine languages across Europe, Asia and the Middle East. Pulitzer prize-winning author Richard Powers is a fan, declaring to the New York Times: “I think of her every time I go out into the world for a walk.” Robert Macfarlane told me he finds her work “grounding, calming, and quietly revolutionary”.

Indeed, Braiding Sweetrgrass has engaged readers from many backgrounds. “I think when indigenous people either read or listen to this book, what resonates with them is the life experience of an indigenous person. It is part of the story of American colonisation,” said Rosalyn LaPier, an ethnobotanist and enrolled member of the Blackfeet Tribe of Montana and Metis, who co-authored with Kimmerer a declaration of support from indigenous scientists for 2017’s March for Science. “Part of it is, how do you revitalise your life? How do you relearn your language? How do you recreate a new relationship with the natural world when it’s not the same as the natural world your tribal community has a longstanding relationship with? It’s a common, shared story.”

Other lessons from the book have resonated, too. Jessica Goldschmidt, a 31-year-old writer living in Los Angeles, describes how it helped her during her first week of quarantine. “I was feeling very lonely and I was repotting some plants” and realised how important it was because “the book was helping me to think of them as people. It’s something I do everyday, because I’m just like: ‘I don’t know when I’m going to touch a person again.'”

“What’s being revealed to me from readers is a really deep longing for connection with nature,” Kimmerer says, referencing Edward O Wilson’s notion of biophilia, our innate love for living things. “It’s as if people remember in some kind of early, ancestral place within them. They’re remembering what it might be like to live somewhere you felt companionship with the living world, not estrangement. Though the flip side to loving the world so much,” she points out, citing the influential conservationist Aldo Leopold, is that to have an ecological education is to “live alone in a world of wounds”.

“We tend to shy away from that grief,” she explains. “But I think that that’s the role of art: to help us into grief, and through grief, for each other, for our values, for the living world. You know, I think about grief as a measure of our love, that grief compels us to do something, to love more.” Compelling us to love nature more is central to her long-term project, and it’s also the subject of her next book, though “it’s definitely a work in progress”. “The way I’m framing it to myself is, when somebody closes that book, the rights of nature make perfect sense to them,” she says. “I’m really trying to convey plants as persons.”

Key to this is restoring what Kimmerer calls the “grammar of animacy”. This means viewing nature not as a resource but like an elder “relative” – to recognise kinship with plants, mountains and lakes. The idea, rooted in indigenous language and philosophy (where a natural being isn’t regarded as “it” but as kin) holds affinities with the emerging rights-of-nature movement, which seeks legal personhood as a means of conservation. Kimmerer understands her work to be the “long game” of creating the “cultural underpinnings”.

“Laws are a reflection of social movements,” she says. “Laws are a reflection of our values. So our work has to be to not necessarily use the existing laws, but to promote a growth in values of justice. That’s where I really see storytelling and art playing that role, to help move consciousness in a way that these legal structures of rights of nature makes perfect sense. I dream of a day where people say: ‘Well, duh, of course! Of course those trees have standing.'”

Our conversation turns once more to topics pandemic-related. Kimmerer says that the coronavirus has reminded us that we’re “biological beings, subject to the laws of nature. That alone can be a shaking,” she says, motioning with her fist. “But I wonder, can we at some point turn our attention away to say the vulnerability we are experiencing right now is the vulnerability that songbirds feel every single day of their lives? Could this extend our sense of ecological compassion, to the rest of our more-than-human relatives?”

Kimmerer often thinks about how best to use her time and energy during this troubled era. Though she views demands for unlimited economic growth and resource exploitation as “all this foolishness”, she recognises that “I don’t have the power to dismantle Monsanto. But what I do have is the capacity to change how I live on a daily basis and how I think about the world. I just have to have faith that when we change how we think, we suddenly change how we act and how those around us act, and that’s how the world changes. It’s by changing hearts and changing minds. And it’s contagious. I became an environmental scientist and a writer because of what I witnessed growing up within a world of gratitude and gifts.”

“A contagion of gratitude,” she marvels, speaking the words slowly. “I’m just trying to think about what that would be like. Acting out of gratitude, as a pandemic. I can see it.”