bove the thick canopy of oak, hazel and sycamore, the spring sun burns brightly, but by the time it reaches the understorey of the ghyll it has been diffused into a witchlike green glow. In this world below, it is a riot of life and dereliction. 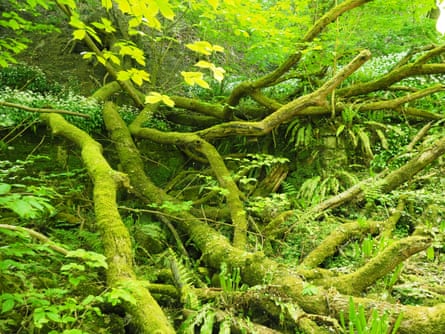 The mossy limbs of a collapsed hazel straggle anarchically across the foundations of a vanished structure, reminding me of the huge roots of a strangler fig constricting the ruins of an Angkor temple. Clumps of hart’s-tongue fern, their lurid fronds curling at the top, sprout from mossed-up rubble, leeching life from the lime mortar that once held a building together. The beck tumbles through old watermill workings, which are slowly being prised apart by ivy and erosion. Bricks, branches, mosses, trees, ferns and flowers pile on top of each other in a lush, lawless scramble, where the treasured distinction between “artificial” and “natural” has all but disappeared.

The ruins that are slowly being digested in the green belly of the ghyll are probably from the 19th century, but here they look like the remnants of a lost rainforest civilisation. There is a strange sense of cultural amnesia. This ravine is a forgotten fold in the landscape, where sunken woodland surrounds abandoned mills that have been repurposed as scrapyards and rubbish dumps; the extinct industrial culture of northern England is being slowly composted by nature, or has rubbish heaped on its remains. 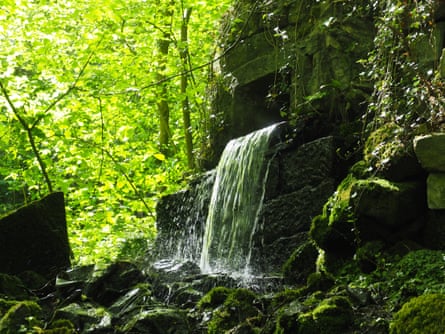 But even so, the atmosphere is charged with the dark alchemy of May. Rot and soil are somehow transmuted into an open-air festival of new colour: flames of bluebell; white sparkles of greater stitchwort; lavish foams of hawthorn blossom that smell sweet and shocking at the same time.

Most startling of all is the wild garlic (Allium ursinum). The globe-shaped heads of its star-shaped white flowers carpet the ghyll in their thousands, piling up like snow drifts, and almost completely swamping a precariously buckling bridge. Lit by splashes of sunlight, the flowers look impossibly bright and clean, but the pong they emit is anything but: a heady May miasma, created by the conjuring of new life from decay.