‘Many will starve’: locusts devour crops and livelihoods in Pakistan

Mir Gul Muhammad, a farmer in Balochistan province, was blunt. “The worst that we have ever seen, ever, in our whole life,” he said of the swarms of locusts that descended on his village of Gharok.

“I cultivated around 50 acres of cotton crops and all of them have been eaten and destroyed by locusts,” he said. “Besides cotton, my other crops – onion, chilli and tomato – have been affected badly too. It is a loss of around 10m rupees [GBP51,000]. As a farmer, it will take years to recover from this loss.”

Farmers across Pakistan are suffering the worst plague of locusts in recent history, which has caused billions of dollars in damage and led to fears of long-term food shortages.

The Pakistani government declared a national emergency this year after the locusts began to decimate winter crops. The first swarm came from the United Arab Emirates in mid-2019, and in the next few weeks time a new infestation is expected to arrive from Iran. 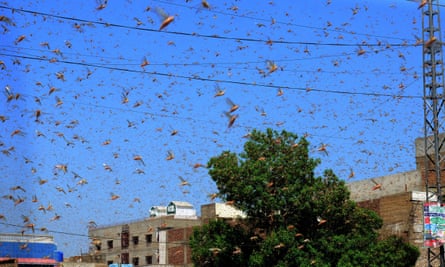 Muhammad said he had no means of dealing with locusts and that the government was in “deep slumber” about farmers’ plight. “The government is not doing anything. It’s a helpless situation,” he said.

One of the worst hit provinces is Sindh, where Moti Lal said his livelihood was destroyed last week in one fell swoop.

“All my green crops, such as wheat and mustard, were attacked and ruined by locusts,” he said. “We had borrowed 40,000 rupees [GBP400] through micro-financing schemes to invest in farming. Now, all that amount is gone.”

Pakistan will incur losses of about GBP2bn in winter crops, such as wheat, and a further GBP2.3bn in the summer crops being planted now, according to the UN’s Food and Agriculture Organization (FAO). 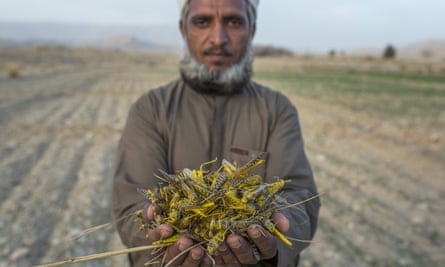 This will be economically devastating for a country where agriculture accounts for 20% of GDP and 65% of the population live and work in agricultural areas. Pakistan is already suffering from crippling inflation, which is now at a 12-year high, and the unprecedented economic burden imposed by the coronavirus pandemic.

The cost of flour and vegetables had already risen 15% this year, and the locust infestation could make even basic food staples unaffordable.

Ismail Rahoo, state minister of agriculture for Sindh, described the plague as a “dangerous and catastrophic threat to the economy, agriculture and food security in Pakistan”.

“This year it will be ten times worse than last year. They are attacking from three sides,” he said. “The locusts and their eggs have now covered 50,000 square kilometres of farmland. We are expecting them to infest more than 5m hectares. And they are not just attacking Sindh province, but also the agricultural areas of Punjab and Balochistan.”

Heavy rains on the Arabian peninsula in 2019 triggered explosive growth in the locust population, and they began causing problems in India, Pakistan and a number of African countries last year. The second generation is 20 times bigger. Locusts move in swarms of up to 50 million, can travel 90 miles a day, and lay as many as 1,000 eggs per square metre of land.

Rahoo said the federal government had ignored various requests to spray pesticide from the air, something he said the Sindh state government did not have the resources to do.

Muhammad Akram Dashti, a senator from Balochistan, gave a speech in parliament in May 2019 urging the federal government to start preparing for the locust plague that had just emerged in his province.

“It could have been prevented,” he said. “I raised this issue when it was confined to a division of Balochistan province. It’s the responsibility of federal government to help farmers against such destruction, but the federal government didn’t take it seriously. I requested for spraying of crops times and again. Nothing happened.”