‘It’s all on hold’: how Covid-19 derailed the fight against plastic waste

2020 was supposed to be the year America revolted against plastic.

Consumers were refusing straws and toting their own coffee mugs. Legislators had proposed an unprecedented wave of laws to ban single-use plastics. Even companies like Coke and Pepsi were opening up to the idea plastic might not be the future.

Then came the Covid-19 pandemic. Now activists worry the anti-plastic movement is once again back in the trenches.

The fight has stalled on a number of fronts across the US. Fears about the virus spreading on surfaces prompted several states to temporarily ban reusable grocery bags, sending single-use bags flooding back into the marketplace. Major legislation aimed at reducing plastics packaging has stalled as lawmakers’ priorities shifted elsewhere. Disposable masks and gloves have become the harbingers of pandemic life, along with plastic take-out food containers and the debris of Amazon packages.

Meanwhile the plastics industry ramped up its lobbying, urging federal agencies to declare the sanitary benefits of disposable plastics, and arguing that plastic bag bans went against public health.

“The plastic reduction movement was in full swing and moving faster than any environmental issue I’ve ever worked on,” said Martin Bourque, who runs the Ecology Center, the recycling program in Berkeley, California, that has spearheaded waste reduction since the 1970s. “Since March, it’s all been on hold.”

California has long led the way in anti-plastic efforts, banning single-use bags in 2014. But when the pandemic hit the state suddenly reversed course, suspending the law. Numerous California county health departments took it a step further and banned customers from bringing their own reusable bags into stores. 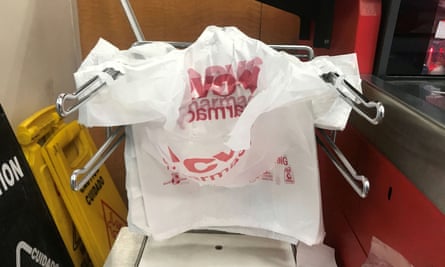 “When Covid-19 came out, we were worried about everything,” said Jan Dell, the founder of the environmental group the Last Beach Cleanup, and a member of California’s newly-created recycling commission.“There was all this conflicting information. The health crisis brought everything to a halt.”

The result has been 500m additional plastic bags handed out per month in California alone, estimates Mark Murray, the executive director of Californians against Waste.

At least five states – including California, Massachusetts, Connecticut, New York and Maine – suspended or delayed bag bans and other laws designed to reduce disposable plastics because of the pandemic, according to a count compiled by the Product Stewardship Institute, a national non-profit committed to reducing the environmental impacts of packaging. New Hampshire and Illinois, which do not have statewide plastic bag bans, nevertheless banned customers from bringing their own reusables into stores.

While some of the states, including California, are starting to reinstate their old bag laws, some environmentalists fear it could be tough to get consumers back on track.

“It’s taken us five years to really cement the behavior of bringing your own bags,” said Borque, whose center handles the recycling for the City of Berkeley. “From a recycler’s perspective, the change has been huge. To go back and think we might have all those plastic bags clogging our storm drains, littering our pasture land and cluttering our streets is really chilling.”

The plastic industry swoops in

The fear of reusable bags seemed logical at first. Little was known about how the virus spread, and plastic lobbyists quickly capitalized on this knowledge gap.

On 18 March, in the early days of the crisis, the Plastic Industry Association, a lobbying group for the plastics industry, wrote a letter to the US Department of Health and Human Services asking it to “make a public statement on the health and safety benefits seen in single-use plastics” and “speak out against bans on these products as a public safety risk.”

Later, in another move that aggravated anti-plastic campaigners, the CDC issued advice that restaurants reopening after the pandemic use all disposable plates and foodware to guard against the spread of the virus.

Experts now believe that the virus is primarily spread through person-to-person contact, rather than contaminated surfaces such as grocery bags. And while environmental activists acknowledge plastic has a vital role in the medical industry, they say the industry is using the crisis to stall efforts to reduce products that are purely wasteful.

“We saw the plastic industry step in really quickly and try to exploit Covid-19 fears that reusable is dirty and dangerous and push the idea that single-use plastics are the answer to keep everyone safe,” said John Hocevar, the Ocean Campaigns director for Greenpeace.

Greenpeace charges that the move to end plastic bag bans is predicated on studies funded by the plastic industry itself, in particular a 2011 study paid for by the plastics lobbying group the American Chemistry Council. The study found that most randomly tested reusable bags were contaminated with bacteria but advised that the problem could be remedied by asking consumers to wash their bags. 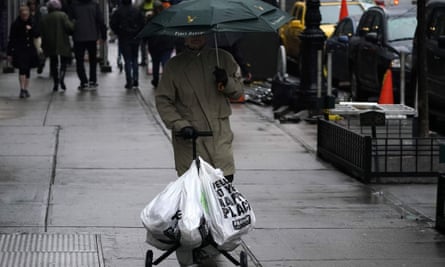 As Covid-19 spread in late March, Ryan Synclair, a researcher associated with the study, resurfaced with an op-ed for USA Today urging employers and regulators “to do everything possible” to protect store clerks, including banning reusable bags – a move Greenpeace points to as a classic industry tactic.

Meanwhile, an April study published in the Lancet Microbe found that coronavirus droplets actually live longer on plastic than other surfaces such as paper or cardboard, although cloth bags were not tested.

“There isn’t sound science to back up industry claims about single-use plastic being safer,” said the US Senator Tom Udall, who has proposed major legislation to limit single-use plastics which has yet to be given a hearing in the Senate. “While people are rightly focused on the coronavirus crisis, they remain deeply alarmed by the looming environmental crises we are facing as a planet.”

‘Plastic bags out the wazoo’

In progressive regions like the San Francisco Bay Area and Santa Monica, the ban on reusables has felt like societal inversion. Where once shoppers might have scored a shameful look for forgetting to BYO-bag, now they find themselves awash with an excess of single-use items.

At a shopping plaza in El Cerrito, California, Linda Rexall, a local senior, was returning her zippered bags to the dry cleaner in the hopes they could be reused.

“I’ve got plastic bags out the wazoo at home,” she said. “And everything in the grocery store now comes in bags – everything! It’s terrible.”

In the parking lot, retirees Marian Gade and Jerry Michaels were executing an elaborate grocery repacking operation, in order to avoid adding more plastic bags to the piles already accumulating in their cars, living room and basement.

Reusable bags weren’t allowed in the store, so the couple hauled frozen pizza, tomato sauce and Old Milwaukee Beers on their motorized shopping cart out to the car, before lifting them into colorful bags in the back of their trunk.

“We have so many bags. Why waste another one?” said Gade.

Some in the movement believe the pandemic will only be a minor setback, as growing piles of household waste remind consumers how fed up they are with throw-away culture.

“Single use plastic is its own worst enemy,” said Murray. “The amount that is being generated is absolutely unsustainable.”

Orford Ness: the apocalyptic art zone at war with nature

Is remote working better for the environment? Not necessarily

Today it’s cool, tomorrow it’s junk. We have to act against our throwaway culture | Jonathan Chapman