Whether showing off their burgers going mouldy due to lack of preservatives, making vegan Impossible Whoppers available across the US, or – most recently – using a whimsical, flatulence-focused commercial to tout new low-methane patties, Burger King’s effort to remake itself as the conscious consumer’s fast food of choice is in full swing.

Meat produced from livestock is a significant source of methane emissions and contributor to climate change, and Burger King think they can cut those emissions by changing what the cows are given to eat.

But the latest addition to the environmentally friendly menu might have been announced too soon. Researchers and experts on animal feeding and climate impact say the science is promising, but not yet strong, on Burger King’s feed additive of choice: lemongrass.

“The study, which found 33% reduction in methane emissions, has been completed, but not published,” says University of California at Davis animal science professor Frank Mitloehner. “Why Burger King picked lemongrass, I don’t understand, because there’s some [other livestock feed additives] that have been shown to be effective in reducing methane emissions from ruminants and have been extensively published.”

While the original work cited by Burger King, by Dr Castelan-Ortega at the National Autonomous University of Mexico, showed evidence that feeding lemongrass to cattle could reduce methane emissions from cattle by an average of 33%, a study by Dr Ermias Kebreab at UC Davis to verify those results was inconclusive. 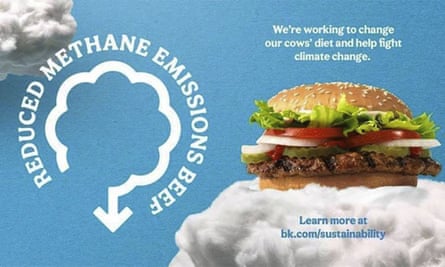 “The main reason [for methane reduction],” Kebreab wrote in an email, “is that lemongrass contains essential oils and tannins, both of which have been shown to reduce methane emissions by modifying the gut environment and inhibiting the microbes responsible for methane production.”

Lemongrass used in the UC Davis experiment did not match the tannin profile of the Mexican plants, leading to the inconclusive result.

The inconclusive results from UC Davis suggest the method may not work so well for US cattle feeders, however. If lemongrass available in the US doesn’t match the qualities of the original study, it is unlikely to lead to the same levels of reduced methane emissions.

However, the good news is that there are other methane-reducing ingredients out there, even if American varieties of lemongrass prove ineffective. Seaweed, for example, contains bioactive ingredients that can reduce methane production in a cow’s rumen. Another product, called 3-NOP by the Dutch company DSM, is an enzyme disrupter that promises to reduce methane emissions in cattle by 30%, though it’s not currently approved by the FDA as a feed additive.

“Beef is one of our top commodities and we understand that we share a responsibility for the impact of the meat industry when it comes to climate change,” writes Matt Banton, global head of innovation and sustainability for Burger King.

And with more than 13,000 locations in 97 countries, the environmental impact of the company’s meat production methods is certainly significant. In addition, the company’s efforts increase pressure on competitors such as McDonald’s, which feeds the equivalent of 1% of the world’s population every day.

But it’s also worth noting that focusing on feed additives alone ignores the full picture. Most US beef cattle are only on feed during the last four months or so of their life. That means for the first 10-12 months prior to their arrival at a feedlot – time they spend grazing on pasture – they are, according to Mitloehner, actually producing more methane each day than they do in a confined facility.

“So that does not mean that the Burger King meat patty has a third less methane associated with it than a comparable patty, because they did not consider the year prior to going into the feed as part of the impact,” he says.

Burger King did not respond to questions on the effectiveness of lemongrass diets for cattle.

Its low-methane burgers will be available in Miami, New York, Austin, Portland and Los Angeles while stocks last.

Caught between China and the US, the pressure for HSBC to split grows | Nils Pratley

‘A remarkable phenomenon’: billions of cicadas set to emerge across eastern US