‘We have no market, but lots of lobsters’: a Maine lobsterwoman fights for her livelihood

“If I’m not fishing, I’m working on gear or my boat. Or meetings involving fishing. It’s what I eat, sleep and breathe,” lobsterwoman Julie Eaton tells me.

Eaton lives on Deer Isle, and fishes Penobscot Bay – a deep blue inlet of the Gulf of Maine, dotted by working waterfronts, rocky islands, wooden schooners and lobster buoys. I ask her what it’s like to start lobster season.

“How do I even begin to tell you what it feels like?” she says, sighing. “It feels like I’ve held my breath all winter. Finally, when I turn the key to my boat and I’m going across the bay, my lungs fill with air for the first time in months. All of a sudden I feel alive. The freedom! The independence. The beauty. It’s almost spiritual, the connection I have with the sea.”

The connection between Maine lobstermen and the sea is legendary. In 1954, the beloved author EB White wrote and narrated a short film set on the same island Julie calls home. A Maine Lobsterman features Gene Eaton – a likely relative of Julie’s husband – on his boat Nor Wester. Gene began his day at dawn, as Julie soon will.

Lobstering has never been an easy vocation. It is, as White said 50 years ago, for men who don’t mind wet feet. Men who can navigate a rocky shoreline with a faulty compass in brutal weather.

Today, in the spring of 2020, Maine’s lobstermen – and women – face pronounced challenges: an ageing fleet, a bait shortage, regulations that restrict vertical fishing lines in order to protect endangered right whales, and a decrease in trade with China after Trump’s trade war.

Maine fishers confront many of the same hurdles already noted in this column: working docks are disappearing, and the opioid crisis has reduced the reliability of crew. Climate change – the great accelerant – is warming the Gulf of Maine and shifting lobster populations north. Plus, the lingering pandemic has silenced a once-thriving market for fresh lobster.

“The pandemic is killing us,” Julie Eaton tells me. “It’s a terrible thing. We have no market, but lots of lobsters. We’re safe to fish on our boats. On my boat, it’s just me and my stern-woman. But I have no place to sell my catch! Right now, I’m home working on traps and gear. I’ll set my traps as late as I can, and still be able to make a year’s pay. I’m trying to fish a little smarter, not harder. I have a very limited time to make a year’s pay – it’s a little scary.

“I’m 56. My husband is 76 – we each have boats,” she tells me. “I’m not sure my husband’s going to go this year. He’s very concerned about the market. He had a bad heart attack in February. He may sit this year out.”

Eaton pauses. “I can do that. I can carry us both. If roles were reversed, he’d carry me. That’s how things work around here.”

The big question right now, Dr Andy Pershing tells me, is how many lobsters are going to get caught this year, with the pandemic dampening the market. “What I’m reflecting on,” he says, “is that so many of our models assume a very active lobster fishery. This year totally breaks that assumption. We’re going to learn a ton about lobsters and the fishery.”

Pershing is the Gulf of Maine Research Institute’s chief scientific officer and runs the Climate Change Ecology Lab. He has spearheaded pivotal studies, concluding in 2018 that the Gulf of Maine was warming faster than 99% of other bodies of saltwater on Earth.

According to Esperanza Stancioff, the climate change lead at the University of Maine’s Cooperative Extension and Maine Sea Grant, 2012 was the exceptionally warm year that got the attention of many lobstermen in Maine, and led them to work together with scientists.

“Lobstermen in Maine used to be able to set their watches for the first shed [when lobsters cast off their old shells] of the season,” Stancioff tells me. “In 2012, it came a full six weeks early. There was no market. The soft shells were too fragile to ship. Lobsters were dying in buckets on the docks.”

“Lobstermen are daily ecologists – super bright people,” Stancioff says. “They’re so aware. They’re citizen scientists, many of them, traveling with digital thermometers, taking temps for Noaa [National Oceanic and Atmospheric Administration]. Many are quick to ask the right questions of us and provide the right information so that we can work together on resilience efforts.”

The question is not if the lobster industry will shift in Maine – but when. Stancioff says the center of Maine’s lobster fishery used to be South Thomaston – but has shifted north to Stonington and Canada. Lobster are also moving further offshore, but that means getting an offshore license and requires a bigger boat and different gear. “Some fishers can’t make that step but still risk going offshore,” Stancioff says. 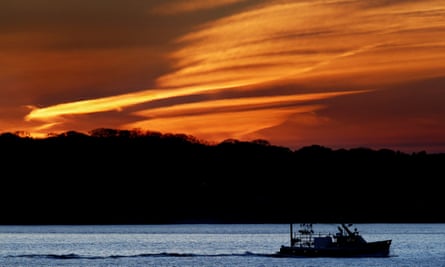 She recognizes the financial pressure on the lobstering community. “The older fishermen – when they got started – they probably got a used boat, used gear, started small, worked their way up, did well for themselves,” she says. “But their children – especially if they purchased a new boat or a new house – are in the hot seat. The ability to weather these changes and impacts is tough. Some younger lobstermen are scrambling. Fishing in Alaska in the off season. Working two jobs to pay the bills.”

Furthermore, they are concerned about increased regulations and gear upgrades that come with protecting the right whales in Maine’s waters. “The feeling of unfairness is paramount to them,” Stancioff says. “There’s a lot coming at them. Covid-19 put it over the edge.”

“Climate change is not going away,” Pershing says. “The waters are really warm right now. They’re going to continue to warm. One of the surprising things we found in our model is that lobster decline in Maine until 2050 – and that feels like a manageable decline. But in 2050 you start to see the climate scenarios really separate. A high CO2 world is simply not compatible with a lobster fishery in Maine.”

Krista Tripp, a young lobsterwoman in Sprucehead, is already taking matters into her own hands and started diversifying her business: she practices aquaculture on the side. “I’ve already started to diversify into aquaculture as a safety net,” Tripp told an interviewer in 2019. ‘”I bought an oyster farm and I’m in the process of expanding it.”

But not all coastal communities are welcoming of those innovations. “Rural gentrification is prevalent in Maine, which has the country’s highest percentage of second home ownership. These people tend to have nostalgic, romantic views of the landscape and natural resources,” Steven Hedlund of the Global Aquaculture Alliance says.

“Community members and organizations like Maine Sea Grant have been working hard to keep our working waterfronts for the fishing industry, to avoid the gentrification of the coast of Maine,” Stancioff tells me. “Many fishermen have had to move inland due to the taxes and development pressures. Politically speaking, they still hold a lot of value and clout with legislators. However, they’re often left out of the conversation.”

Julie Eaton wants to change that. She’s running for the Maine state house of representatives for district 134. She sees public service as a way of giving back to a community that supported her during a difficult time.

“In 1987,” she tells me, “I was hit by a car. The injuries put me in the hospital for months. I was in a coma for a long time. I was incredibly lucky – I survived. I learned what was important in life. It wasn’t what I was going to buy next, or my next outfit – it was about being able to take my next steps and next breath. Working through this process, I met a lobsterman. He took me out on his boat. It was the one place where I felt accepted and included – like I belonged somewhere.

“I looked, talkedand moved differently,” she says. “But the crew didn’t care. They accepted me for who I was. In 1992, I moved to Vinalhaven, where a man taught me how to fish. I bought a little outboard and I fished on my own out there – my neighbors were tremendously supportive of me.”

Now she wants to support them. “We live on an island. Our community is incredible. When someone is in need; we all help. Every one of us. This winter I’ve been providing bags of groceries to 57 seniors every week. I don’t want them to go to the store.

“They paved the way for us, and now I need to fight for them,” she says. “I believe in the importance of coastal communities. Our voice matters. Fishing is the biggest economic driver in my community – but that doesn’t mean that our store, our post office, our churches, our painters, our electricians are any less important. We all function together. Everybody needs a voice.”

But if Pershing’s model holds, the lobster fishery will shift northward in the coming decades, and Maine’s fishermen and coastal communities will have their identities and livelihoods challenged, if not changed for good.

“Lobstering is not what I do to earn a living,” Eaton tells me. “It’s who I am. It’s as addictive as any drug. That pull to the ocean is so powerful. It’s something that I have to do.”