Country diary: an ancient organism rises from the grass

My route home was badly overgrown and I made slow progress, looking down at the rocky, uneven ground and concentrating on keeping a good foothold. Bees and small moths swirled up from around the wild flowers and long grass at the base of the hedge, then something much bigger blundered away from under my feet.

The abrupt, jerky flight was a surprise, and oddly reminiscent of the tiny hummingbirds of western California – but this was a dramatically more ancient organism. As it rose above the tangled grasses, the wingbeats of this golden-ringed dragonfly (Cordulegaster boltonii) were clearly audible as a deep chitinous drone, the frequency modulating as it repeatedly changed direction. I watched it fly further up the path, expecting it to veer away and be lost to view, but instead it settled again on a tall stem.

Moving even more cautiously, I walked slowly towards the dragonfly – the largest specimen I had seen for several years. As I approached, it oriented itself carefully and began to bask in the warm July sunshine. Dramatically marked with contrasting bands of yellow and black, the slender body was as long as my middle finger and, as the stem moved in the breeze, the complex structure of the wing surface created transient patches of iridescence.

Dragonflies have a family history reaching back hundreds of millions of years, with origins almost as distant as the ancient Silurian rocks I was standing on. The ancestors that flew in the rich Carboniferous atmosphere must have been an especially impressive sight, with fossil evidence showing a wingspan the length of my arm – the apex aerial predators of their day. 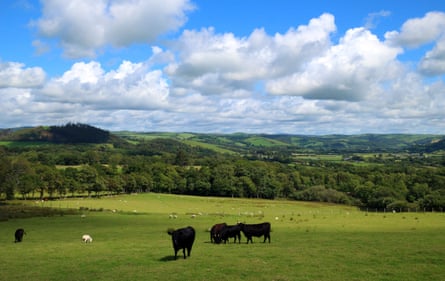 Kneeling awkwardly on the ground, I studied the insect for several minutes, noting the way the bulbous green-tinged eyes almost joined at the top of the head and how the black pincers of the feet gripped the plant. Then, the breeze blew the stem into my shadow and, alarmed by the sudden change of light, the dragonfly started upwards from its perch. Caught by the rising wind, it whirred away across the meadows towards the dark, still oxbow lakes that mark the meandering former courses of the Afon Rheidol.