‘Why I spent my life saving the Blakiston’s fish owl’

When I was 19, in the summer of 1995, I fell in love with an owl. I’d just spent two weeks in Primorye in the Russian far east – a wild, mountainous province bordering the Sea of Japan, China and North Korea. It is a region of dense forests, rolling mountains, clean rivers and spectacular coastlines. Exotic locations were nothing new for me: I was born in the United States but grew up in a diplomat’s family, bouncing around the world from Uruguay to Panama as a young child, and to West Germany and Canada as a teen. Before the age of 16, I’d only lived in the United States for two years.

While I’d always been interested in the outdoors, I’d been ambivalent about birds and had never thought they would become my life’s passion. In fact, it was teenage envy that got me started. A high-school friend, now a professor of organismal biology at Gettysburg College, began a passionate study of birds and I wanted to keep up.

When I left Russia after that summer in 1995, I brought home with me a Soviet-era book about the region’s birds. I immersed myself in the pages of this intoxicating world, turning from one remarkable species to the next, not knowing the English names of any of them, and struggling to decipher the Russian text with my pocket dictionary. The species that most drew my fascination was the Blakiston’s fish owl

, the largest owl species in the world. With some individuals exceeding 5kg, they weigh the equivalent of a dozen crows, and fly on 2m, eagle-sized wings. They are dishevelled masses of woodchip-brown plumage, electric yellow eyes and long and floppy ear tufts like the leaves of a fern. These owls live in some of the hardest-to-reach forests of northeast Asia, enduring temperatures that dip to -30C. They eat salmon plucked from rivers and nest in centuries-old trees.

In addition to being absolute giants, Blakiston’s make us rethink what it means to be an owl. As a rule, owls are famous for their silent flight and hypersensitive hearing, both adaptations that fish owls lack – as their prey is underwater, a silent attack is unnecessary.

Many owls have a distinctive facial disc – the characteristic round feather pattern on an owl’s face channels the faintest sounds to its ears. But in fish owls this disc is poorly defined. Instead they rely heavily on sight to hunt, crouching motionless on a riverbank, waiting for a ripple in the water to pounce on a passing fish. 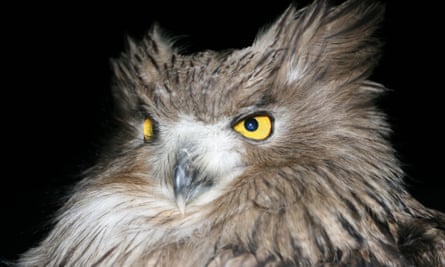 There were four photos of fish owls in my Soviet book, taken by Yury Pukinsky, the first scientist to find a fish owl nest in Russia, in 1971. Pukinsky had spent years studying birds along the Bikin River, in northern Primorye, a very remote place even today. One of his photos showed an adult fish owl hunched on a branch with the limp remains of a frog hanging from its beak. Another showed a fluffy grey nestling peering out defiantly from behind the carcass of an enormous salmon brought to the nest by a parent. The images were grainy, exciting and filled with mystery. I was smitten but, as with a celebrity crush, I knew I’d never meet one in real life.

Five years later, and quite by chance, I did.

I was back in Primorye, with the Peace Corps, living in Lazo, a small village surrounded by the Sikhote-Alin mountains some four hours east of Vladivostok. Remote as it was, I didn’t think this was nearly exotic enough for fish owls.

It was one of those late winter days that flirted with spring. The sun felt warmer than it had in months, but the wind still carried the full force of winter’s cold. Perhaps it was the sound of the wind that distracted the owl, allowing me to get so close before it noticed me. I didn’t see it until it flew from a tree, enormous and panicked, taking to the air with laboured flaps. It hooted its displeasure, then landed for a moment in the bare canopy nearby. I grabbed my camera and took a few quick shots. The creature seemed almost too big and too comical to be a real bird, as if someone had hastily glued fistfuls of feathers to a small bear, then propped the dazed beast in the tree. Deciding that I was a threat, the creature pivoted to escape, crashing through the trees as its enormous wings, with feathers the length of my forearm, clipped the branches. Flakes of displaced bark spiralled down as the bird flew out of sight.

In retrospect, it’s obvious I’d seen a fish owl but, in the moment, my brain refused to accept this truth. I’d convinced myself so thoroughly that I’d never see a fish owl that I simply refused to believe it. How could it be that this bird of mystery, found only in the remotest of forests, was on the edge of Lazo with its hoot blending among the sounds of passing trucks and baying village dogs?

Thankfully, my few grainy photos, after calm and collected inspection, confirmed the sighting. And after I showed my photos to a Vladivostok-based ornithologist named Sergey Surmach, I learned that a fish owl hadn’t been seen so far south in the Sikhote-Alin mountains for 100 years.

The more I talked to Surmach, and heard about fish owls and their habitat, the more concerned I became for the future of the species. There were thought to be fewer than 1,000 of them in Russia. Across the sea in Japan, just 300km east, fish owls had been reduced to fewer than 100 birds by the early 1980s, down from approximately 500 pairs at the end of the 19th century. They had lost nesting habitat to logging, and food to construction of downstream dams that blocked salmon migration up rivers.

The fish owls of Primorye had been shielded from a similar fate by Soviet inertia, poor infrastructure and a low human population. But the free market that had emerged in the 1990s bred wealth, corruption and a covetous eye focused keenly on the untouched natural resources in northern Primorye, thought to be the bird’s global stronghold. While fish owls and other endangered species were protected by Russian law – it was illegal to kill them or destroy their habitat – by the late 1990s, previously inaccessible forests in Primorye were increasingly under threat. Fish owls needed a champion. 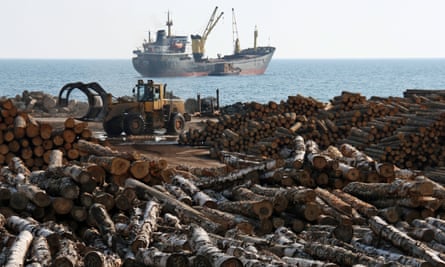 Surmach and I agreed to collaborate on an ambitious project to study the fish owls of Primorye, to learn how to protect them. Our intentions were to do so while not ignoring the 2m people living in the province, many of whom rely on logging and fishing for their livelihoods. The needs of birds and humans are inextricably linked here – both have depended on the same resources for centuries. Before the Russians came to dip their nets in the rivers and harvest trees, Manchurian and indigenous populations did the same. The Udege and Nanai made embroidered clothing from salmon skins and carved boats from enormous, hollowed-out trees. Fish owl reliance on these resources has remained at modest levels; it is human needs that have escalated.

This work was not for the faint of heart, and I credit Surmach and another Sergey – Avedyuk – for sharing my vision of making the world safer for fish owls. In the first five years of this project, I spent three months a year in the Russian forests with Avedyuk and others, far from human settlements. Our work was mostly in winter, with up to five of us packed into a military-style truck with a wood stove to keep us from freezing overnight.

We negotiated with hunters and hermits for food and shelter. We huddled in tents during blizzards. One morning, we woke to find the snowy tracks of an Amur tiger just a few paces from our camp. And at the end of the first field season, we nearly lost our truck while crossing a river during a flood. The work was often disheartening, uncomfortable, cold and lonely. But it was worth it. By the end, we’d collected the information we needed to craft a plan to protect fish owls, a strategy we are still following today.

I’m 43 now and fish owls have been part of my entire adult life, but my duties for the Wildlife Conservation Society now include bird conservation issues across all of Asia. I’m based in Minneapolis, where I have a wife and two small children. In a typical year I will spend up to three months in Asia, from the tundra of the Russian Arctic to the mudflats of Myanmar. Leaving my family for long stretches is hard, no question, but I thrive on the work I do.

Despite my global portfolio, fish owls and Primorye have a close hold on my heart. The forests are among the most exciting and beautiful places I’ve ever been. Along the Sea of Japan coast, the mountains stop almost mid-slope, a rise of lanky oaks giving way to vertical cliffs, some of them 30 storeys tall. The human population is so low here that tracks of tiger or bear can be more common along the sandy beaches than human prints. Inland, wild boar, musk deer and raccoons crash through the lush forests often unseen. Almost any foray into the wild brings some exciting discovery or remarkable encounter.

Importantly, I’ve learned that Primorye is, more so than many other parts of the world, a place where humans and wildlife still share the same resources: fishermen and salmon, loggers and fish owls, hunters and tigers. Many parts of the world are too urban or overpopulated for such natural systems to exist. In Primorye, nature moves in a flow of interconnected parts. Primorye’s trees become floors in North America and Europe, and seafood from its waters is sold throughout Asia. Fish owls are a symbol of this functioning ecosystem, a demonstration that wilderness can still be found. This is what motivates me to continue my work. Despite the ever-increasing network of roads pushing deeper into the wild to extract timber and other natural resources, and the resulting threats to the owls, my Russian colleagues and I continue to actively collect information to learn more about these birds, share what we discover, and protect fish owls and the landscape.

Owls of the Eastern Ice: The Quest to Find and Save the World’s Largest Owl by Jonathan C Slaght is published by Allen Lane at GBP20. Buy it for GBP17.40 at guardianbookshop.com