The song of the black catbird – with its flute-like chirps and screeching single-note squalls – was once heard across Guatemala, Belize and southern Mexico until large-scale farms began to destroy its habitat.

Now, thanks to a collective of musicians, producers and DJs, the tiny bird’s song – and that of nine other endangered species from the region – could be heard on dancefloors around the world, with proceeds going to conserving the endangered birds.

A Guide to the Birdsong of Mexico, Central America and the Caribbean is a 10-track record that samples recordings of endangered, vulnerable or near threatened birds from across the region, with each track composed by artists from the same country.

“The main impulse here is conservation but of course there’s an artistic challenge too,” said Robin Perkins, 33, a record producer from Manchester who leads the project.

The black catbird’s song was worked on by the Belizean group the Garifuna Collective, led by another keen birder-cum-musician, Al Ovando. “My concept was to pay homage to many of the birds that have disappeared and to call for these birds to be protected,” the 44-year-old songwriter said. “I wanted to honour the birds of Belize, and the black catbird has this amazing one-note call.”

The record may pleasing to the ear, but its creators say it is also a call to arms. “This is an emblematic album for a bigger problem: we’ve just featured 10 species of birds, but it speaks to the destruction of the habitats, and that songs across South and Central America are disappearing,” said Perkins.

The album, released via Perkins’ label Shika Shika, follows a 2015 record inspired by endangered birds in South America, which raised more than $15,000 for two bird conservation charities in the region.

For that project, Colombian artist Alejandra Ortiz, 40, of the group Lulacruza, sampled the song of the critically endangered Niceforo’s wren. 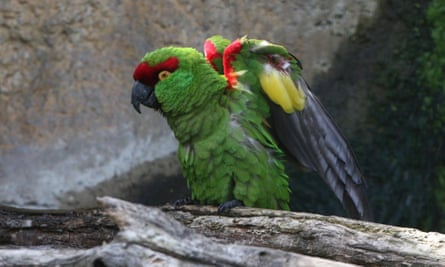 “Nature is always talking to us,” said Ortiz. “And when one birdsong gets quieter as one species disappears, it means that entire ecosystems are failing.”

One in eight of the world’s bird species are threatened with 222 critically endangered, according to BirdLife International.

Six of the birds featured on the album are considered to be endangered, while the other four – including the black catbird – are listed as vulnerable or near threatened.

“It’d be a sad conclusion to reach, that these birdsongs could only be heard on recordings or vinyl and MP3, but we have enough time to act,” Perkins said. “We need activism coming from different places, and music is one of those places.”