Wildlife forensics: how a giant pangolin named Ghost could help save the species

After a two-week chase through Lope-Okanda national park, a mosaic of rainforest and savannah in central Gabon, David Lehmann and his Wildlife Capture Unit were celebrating – they had caught a giant pangolin nicknamed Ghost, the biggest on record.

The team – consisting of eco-guards, an indigenous tracker, a field biologist and a wildlife vet – hope that Ghost, who weighs 38kg and measures 1.72m from nose to tail, will give valuable insights in their fight against poaching.

A nocturnal lifestyle and the fact that it feels most at home in a complex system of deep inaccessible burrows makes the giant ground pangolin – Smutsia gigantea – one of the least researched species in the animal kingdom.

“We know little about their basic ecology, their movements and population sizes, and our lack of knowledge hinders our efforts to protect them,” says Lehmann, a wildlife ecologist. His research is part of the EU’s Ecofac6 programme, a commitment that started in the 1990s to safeguard biodiversity in the Congo basin. “What we are doing here is pioneering work,” he says. 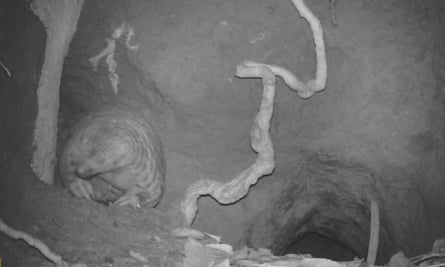 The only scaly mammal in the world, a pangolin’s body is covered with razor-sharp, overlapping keratin plates. When attacked, it rolls into an armoured ball with scales raised: an effective defence against predators, but not against the snare traps of poachers. Pangolins are thought to be the world’s most trafficked mammals. With the four Asian species already hunted to near extinction, the African Wildlife Foundation estimates that around 2.7 million pangolins are trafficked from Africa’s rainforests each year.

All eight pangolin species are on the International Union for Conservation of Nature’s red list, with three listed as critically endangered. As regulators of insect populations, pangolins are a key species in the rainforest: an individual pangolin consumes as many as 70 million ants and termites a year. Without this natural top-down control conservationists fear there would be a cascading impact on the environment, leaving the forest ecology seriously disrupted.

Popular for its meat, the pangolin has long been hunted for local consumption but Gabon’s minister for forests, oceans, environment and climates, Professor Lee White, argues that it is the demand in Asia that is of chief concern. 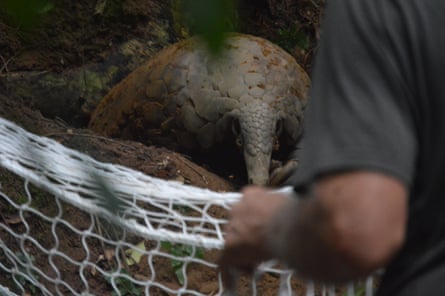 Pangolin scales are a popular ingredient in traditional Chinese medicine, used for anything from rheumatism, asthma and cancer to treating infertility in women and promoting lactation. There is no scientific evidence for the effectiveness of the medicine, so wildlife groups welcomed an announcement in June that pangolin was being removed from the official 2020 listing of ingredients approved for use in traditional Chinese medicine. But any benefits from the move have yet to filter down.

“Gabon is seeing the commercial poaching of pangolins,” says White. “The demand from China and the enormous profit margins are attracting organised crime.” International syndicates smuggling ivory, minerals, gold and diamonds at the border with Cameroon have expanded the scope of their business, he says. “For three years now we have been detecting ivory poachers with sacks of pangolin scale.”

Lehmann wants to “provide governments with rapid and accurate tools for habitat conservation, and improve wildlife crime forensics in general”, and hopes his research will bolster efforts against poaching and trafficking.

Knowledge about the size of the pangolins’ hunting grounds, their population density and seasonally preferred habitats could help the Gabonese National Park Agency to step up effective protective measures, such as more targeted patrols. 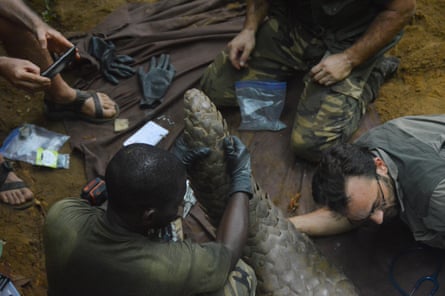 Lehmann and his team take live samples from giant pangolins such as Ghost – something, according to Lehmann, that has never been done before. After capture and sedation, samples of blood, saliva, faeces, tissue and scales are taken from each animal and then a GPS transmitter is fastened to its tail. The entire procedure lasts about two hours and provides a unique set of data.

In addition, a network of 24 to 40 camera traps has been set up in Lope-Okanda national park to monitor the animals’ movements, nest ecology and habitat use.

It is hoped that information from the camera traps combined with spatial data will provide an insight into the animal’s life expectancy, territoriality and motion range, and shed light on its reproductive behaviour. “We are opening the door to a new universe,” says Lehmann.

The scale samples are used to extract their isotopic values, the unique composition of chemical elements such as oxygen, hydrogen or carbon that are stored in the animal’s keratin plates. An “isotopic fingerprint” allows for identification of a pangolin’s geographic home: each environmental zone has its own unique “isoscape”, which can be matched with that of an animal. This technology can be used to identify the origin of confiscated pangolin scales, helping to crack down on smuggling routes.

“We are basically fighting on our own at the moment. And we still haven’t been able to win this war,” says White, who has spearheaded Gabon’s fight against wildlife crimes and, in particular, ivory trafficking for the past three decades. 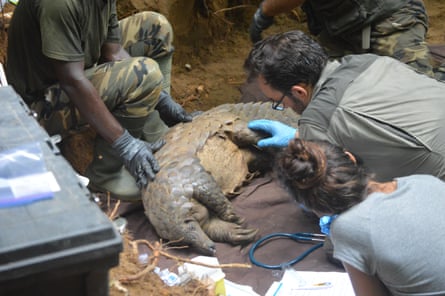 He would like to see more engagement from his European counterparts in the fight to stop international pangolin trafficking. “Thus far, I don’t get the impression that the law enforcement community in most European countries thinks of wildlife crimes particularly seriously.”

Wildlife forensics is a rapidly developing area, and with good reason

Traffic reports that most scales smuggled to China from Cameroon or Nigeria are routed through European airports.

Jose Antonio Alfaro Moreno, a senior specialist for environmental crime at Europol, supports law enforcement agencies across Europe with anti-trafficking operations. “Wildlife crime is a new priority area in the European Union,” he says, adding that agencies are working with a variety of new methods, including using sniffer dogs to detect smuggled animals and animal parts.

“You need to prove to the court that this is the actual species and no other,” he says, noting the importance of lab-based techniques to identify species. Whereas DNA analysis is common, stable isotope analysis is not yet implemented by most countries.

State-of-the-art forensics technology – such as radiocarbon dating and X-ray fluorescence – is already being used to effectively trace illegal timber trading and to target illicit rhino horn and ivory syndicates. 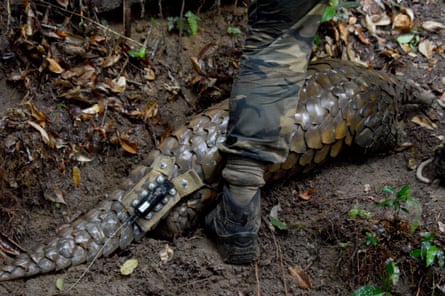 “Wildlife forensics is a rapidly developing area, and with good reason,” says Richard Thomas, Traffic’s Head of Communications. “The application of forensic techniques to wildlife crime can provide the same sort of insights as it does to solving regular criminal cases.”

Behaviour change on the demand side is equally critical for the conservation of pangolins, says Thomas: “Wildlife crime is perceived as low risk-high benefit: it’s a mindset that needs to be changed. Meanwhile, it’s consumer demand that fuels the trade: change consumer behaviour and you change the whole trade.”