Tesco has called on the UK government to order food companies to ensure all food sold in the UK is deforestation-free. The move comes in response to a new Greenpeace campaign calling on the supermarket to cut links to JBS, the world’s biggest meat company, over its alleged links to farms involved in Amazon deforestation.

The supermarket says the UK should introduce due diligence across supply chains to monitor for deforestation. Germany is also weighing up a due diligence law on supply chains, reportedly supported by Angela Merkel. And more than half of Britons would consider rejecting meat products linked to deforestation, a YouGov poll for Greenpeace has found.

“Today we call for our government to mandate food companies, as part of its National Food Strategy, to introduce effective due diligence across supply chains to make sure all food sold in the UK is deforestation-free,” said the Tesco group chief executive, Dave Lewis, in a statement. “We are making tangible progress but we can’t solve this on our own.”

But Tesco said that while it has blocked Brazilian meat sales since 2018, it will not delist two JBS-owned meat suppliers. JBS said it was committed to ending deforestation throughout its supply chain.

With deforestation soaring under Brazil’s far-right president, Jair Bolsonaro, and Amazon fires in July up 28% year-on-year, scientists believe the Amazon is edging towards its “tipping point“, at which point it begins to die and dry out, with catastrophic impacts on global climate.

“Cattle ranching is the biggest driver of deforestation in the Amazon,” said Anna Jones, Greenpeace UK’s head of forests, describing the world’s biggest rainforest as “a big beating ecosystem that helps to regulate the climate and plays a role in climate stability.”

JBS has been linked to farms involved in Amazon deforestation five times in just over a year. Investor Nordea Asset Management has dropped the company from its portfolio.

Greenpeace said JBS is “still slaughtering the Amazon” in a new report also released on Wednesday. “JBS continues to have a problem,” said Jones. “It does not have full transparency.” 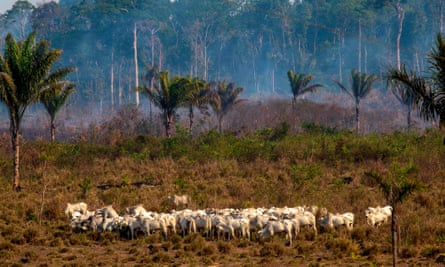 Greenpeace is also calling on Tesco to halve the amount of meat it sells by 2025. Its YouGov poll found that 26% of respondents think supermarkets should sell less meat and 55% “would not consider buying meat from companies that also buy meat from farms in areas that were recently Amazon rainforest.”

Tesco buys meat from two JBS-controlled companies, Moy Park and Tulip, Greenpeace said, which produce soya-reared pork and chicken. It did not say these companies had supply-chain links to Amazon beef or soya but said 68% of the UK’s 3.2m tonnes of annual soya imports comes from South America – one-sixth of which is used by Tesco. Tesco has said it will guarantee its soya comes from verified zero deforestation areas by 2025.

Around a fifth of the soy exported to the EU from Brazil’s Amazon and Cerrado regions – mostly for animal feed – and at least 17% of beef may be coming from land that has been deforested, a new study published in Science said.

“Setting fires to clear land for crops or grazing is destroying precious habitats like the Brazilian rainforest. It must stop. That’s why we support Greenpeace’s aim to prevent further Amazon deforestation,” a spokesperson for Tesco said.

But delisting Moy Park and Tulip – which also supply Aldi, Co-op, Lidl, Sainsbury’s and Waitrose – “could lead to thousands of job losses, impact British farmers and ultimately compromise our ability to offer fresh British meat and chicken to our customers,” Tesco said. “We recognise that the UK as a whole needs to reduce meat and dairy consumption.”

In Brazil, an expensive army operation to combat fires and deforestation has been widely criticised as ineffective by local media, and the government has been reluctant to admit it has a deforestation problem.

“Brazil is one of the few countries in the world that is able to produce and preserve,” agriculture minister Tereza Cristina Dias said in a video speech to the Brazilian Agrobusiness Association on Monday. “We have improved our livestock farming, reducing the use of land and increasing productivity.”

In response to Greenpeace’s claims that the company is indirectly sourcing cattle from farms in the Amazon involved in deforestation, a spokesperson said: “All JBS subsidiary companies adhere to strict responsible procurement policies throughout their supply chains and share our dedication to eliminating deforestation for good.”

“JBS will continue to evolve continuously in new initiatives and plans in the coming months to promote significant changes.”

Britain could be taking the lead in tackling the climate crisis. Where’s the ambition? | Keir Starmer

Firm seeks funding for ‘performance sneakers’ made from coffee waste