Trapped in jobs that make them feel worthless, meat plant workers have spoken out about working life in an industry accused of using temporary agencies to avoid employment responsibilities.

Speaking on condition of anonymity, Romanian and Polish workers described intimidation and gruelling conditions on the factory floor, inconsistent coronavirus measures and feeling afraid to report sickness, in a joint investigation by the Guardian and Lighthouse Reports. All are employed by agencies and most are currently working at, or have recently left, the Dutch company Van Rooi Meat.

“We feel like animals,” said Joe*. “All the workers are unhappy with these conditions … but people are afraid to talk.” Another worker said: “I feel worthless.”

But the dark underbelly of that success story has been exposed, say union representatives, by the coronavirus pandemic. Roughly 80% of the industry’s workers are from central and eastern Europe and employed by temporary agencies rather than directly by meat companies. According to John Klijn from the Netherlands Trade Union Confederation (FNV), they are treated as “second-class workers”.

Temporary contracts and a lack of regulation have left workers hostage to the contentious conditions imposed upon them by agencies, while enabling meat companies to escape liability.

On the factory floor, people working at Van Rooi’s Helmond and Someren sites reported feeling pressured to “work beyond their physical limits”, verbal abuse and intimidation.

“One week we had to push like horses … until we literally dropped down,” said Anna, adding that the conditions had taken a heavy mental and physical toll.

“Even if you work 12 hours a day, they don’t take you into account: they don’t think you are worth anything,” said Max. “When it comes to the way people are treated, this is a tragedy.” He described workers being humiliated and called names by managers. “I’ve had enough with the stress.”

One worker claims he was physically pushed and grabbed by Dutch supervisors and witnessed one tell a colleague to kneel while holding leave request forms in their mouth. Van Rooi Meat says it is not aware of such cases or of verbal abuse. It added: “We hope these workers come to us so we can get to the bottom [of] this.”

“They don’t care about the people,” said Joe, adding that many felt powerless to challenge the conditions.

The company said it didn’t agree that workers were treated like animals, but agreed that the work was demanding. “This is work you have to get used to. The most difficult positions are occupied by people who have been working for eight to 10 years. This proves the opposite that once people are used to it, they stay.”

Van Rooi told the Guardian: “We treat everyone as human and we are always open for dialogue. We feel that we treat the workers properly. At the moment we offer them free food and drinks in the canteens because of corona.”

Workers at both sites reported feeling unsafe during the pandemic. Slaughterhouses have emerged as a hotspot for coronavirus in many countries, notably Ireland, Germany, Brazil and the US. In the Netherlands outbreaks have occurred at other plants as well as at Van Rooi’s Helmond site, which closed at the end of May after 21 workers tested positive. 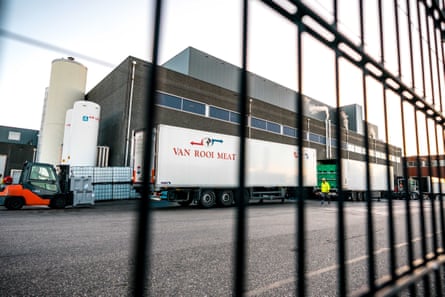 Workers claim that precautions were lacking. Max says there was little information and that even when the first people became sick no measures were taken. Workers reported seeing ill people continue to work with little social distancing.

Measures have improved since Helmond reopened, though workers there and at Someren continue to claim regulations are inconsistently enforced outside of official inspection times – including social distancing in dressing rooms, canteens and on transport to the sites.

One apparently witnessed staff being told to leave the floor during an inspection so it looked less full.

Van Rooi Meat told the Guardian it had taken all necessary measures, including hiring marshals to enforce social distancing and ensuring sick employees stayed home. It said hundreds of thousands of euros had been spent on measures and there had been no cases since 9 June. “From our side there is no reason for being scared. The last things we want are sick people in our factory with the risk of infecting others and endangering continuity of our factory.”

Health authorities said Van Rooi now meets all requirements, which include daily wellbeing assessments. However, workers reported that most people were too afraid to fill the forms out truthfully, for fear of going into quarantine and not being paid, or being fired. Many temporary agency contracts in the industry include the ability to fire with little notice, including if an employee is sick.

Speaking to Dutch media outlet NOS, some workers reported being told to lie on forms.

The role played by temporary agencies, which have flourished in the Netherlands since regulations were relaxed in the 1990s, underpinned many of the workers’ complaints. Agencies provide the majority of labour for Dutch meat companies – recruiting mostly from Poland, Romania and Bulgaria. They typically organise accommodation, transport and health insurance, deducting costs from pay.

Jan Cremers, labour law researcher at Tilburg University in the Netherlands, argues that this puts workers in “complete 100% dependency” on agencies.

Joe said that while work was limited back in Romania, anyone who arrived in the Netherlands looked on the meat industry as a last resort: “I will never work in meat processing [in the future] – I am sick of it.”

Critics argue that ultimately the extensive use of temporary agencies enables meat companies to avoid liability for employment and work conditions.

“They have finally found an easy way to throw all the responsibility over the fence,” said Cremers.

“They [meat companies] don’t really care if the migrant workers have a good life or a bad life – they just look at the money,” said Klijn.

Van Rooi disputes this. “We work in accordance with the law and the collective labour agreement for the meat sector.”

So is industry reform necessary? In neighbouring Germany, the government has announced it will phase out the heavy dependency of the industry on subcontractors.

Paolo Patruno from Clitravi, a representative association for the European meat-processing industry, argues that the focus is always on the worst conditions in the industry, “and these cases, which are the exceptions … are taken as the rule”.

But Enrico Somaglia, deputy secretary general of the European Federation of Food, Agriculture and Tourism Trade Unions (Effat), argues these problems are systemic and that companies find “tricks” to avoid responsibilities. The use of temporary agencies and subcontractors, he said, “are made basically to escape employer liability and cut costs at the expense of the workers”. An Effat report last month linked poor working, employment and housing conditions to Covid-19 outbreaks in the industry.

The pandemic has galvanised action in the Netherlands: notably through a taskforce led by Dutch mayor Emile Roemer recommending stricter agency regulation. The union argues workers should be directly employed by meat companies.

But Somaglia says action needs to go further: “The response needs to be European because the sector is sick everywhere.”

“The meat sector is losing more and more ground,” said Peter Schmidt, head of international affairs at the German food workers union, NGG. “So now we really have an open window to change the situation.”