Thailand’s turtle hatchlings finally have the beach to themselves

When Kosum Kao-Uthai’s family noticed mysterious imprints in the sand outside the hotel resort they own in Koh Samui, she knew exactly which animal had paid a visit. She remembered spotting the same marks, left by a nesting sea turtle, when, as a teenager, she helped her father farm coconuts on the island.

Kosum hadn’t seen another for five decades. Yet, this year, as the coronavirus pandemic emptied Thailand of tourists, nests belonging to endangered hawksbill and green turtles cropped up across the island. Since February, 838 baby turtles have scuttled their way across the island’s sandy beaches and into the sea, with two nests yet to hatch.

The surge in nests – 19 so far – has delighted conservationists who have been fighting for years to reduce the threats posed by humans. “It is really exciting and we hope that people in Samui will help us protect the turtles in the future – we have a chance,” says Dr Thon Thamrongnawasawat, deputy dean at the faculty of fisheries at Kasetsart University in Bangkok. 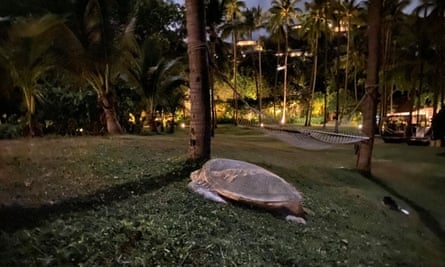 Local people and businesses have rallied to protect the animals, building bamboo fences around nests to shield them from roaming water lizards and dogs. Some have camped next to nests in the hope of spotting the babies hatch, or seeing a mother turtle, who usually returns after a break of 10 or 12 days to lay more eggs. One hotel instructed its security teams to keep a watchful eye, visiting every hour, and redirected CCTV and motion sensors to make sure the eggs were not disturbed.

Female turtles typically nest every two to three years, using their flippers to dig a teardrop-shaped cavity in the sand, and lay between 80 and 120 leathery eggs. “They look for areas that are calm and peaceful,” says Thepsuda Loyjiw, a marine biologist working at the Banyan Tree resort, where a green turtle laid five nests this year. “We try to grow the [banyan] plants, because normally they love the trees because of the shade,” she says, adding that the turtles usually nest at night. 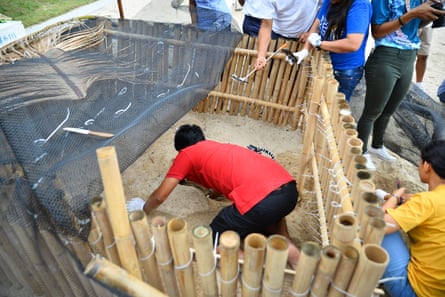 It’s not clear if turtles that may have been put off from nesting on crowded Samui beaches in previous years might have travelled elsewhere to nest. It’s possible that they released the eggs in the water, and they failed to hatch, says Thon. “The eggs inside the sea turtle cannot wait. It’s like humans – if you need to give birth, you will give birth in the taxi,” he says.

The number of sea turtles in Thailand’s waters has fallen drastically over the past century. Samui was a completely different place 50 years ago, says Kosum: “It was only wooden forests, coconut farms and there was no road.” Now the island has more than 2 million visitors in a good year. It’s not just the development of beaches that poses a threat to turtles. Other dangers include poaching, pollution and the risks posed by fishing nets.

Around the world, their future is increasingly threatened by global heating, as hotter temperatures contribute to rising sea levels and storms, changing ocean currents and harming the coral reefs on which many depend for survival. There is also growing concern about the impact of the climate crisis on the sex ratio of turtles: the warmer the sand in which eggs are buried, the more likely the offspring will develop into a female.

In Thailand, conservation experts are finding new ways to monitor the species. Over recent months, the Phuket Marine Biological Centre has tracked a hawksbill mother turtle that laid eggs on Samui, in an attempt to discover more about how her route can be better protected. “If you want to conserve any animal you have to know their life cycle and habitat,” says Dr Kongkiat Kittiwatanawong, the centre’s director. Facial recognition technology that identifies turtles is also being developed. It is hoped that this could help generate more accurate estimates of numbers, as turtles are difficult to count because of their migration patterns. 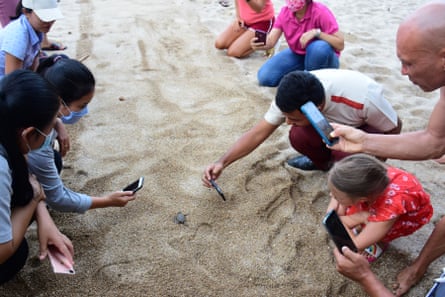 The number of nests reported on Samui in 2020 is far higher than any other year on record – though veterinary reports only date back to 2012. No one knows what will happen when the island sees the return of tourists, which so many businesses depend upon. “Before [the pandemic] it was full, the parking area was full,” says Kosum, adding that the family business has become increasingly hard to run.

Thon hopes a balance can be struck. The pandemic has illustrated that Samui is an important nesting ground for the species, and the pause in tourism caused by the pandemic is a chance to act, he says. “We have to.”