Country diary: a tad curious about this creature’s metamorphosis

My daily walk in late March gave me the chance to observe many small changes in nature. During that tracing and retracing of the same ground, I’d cross a ditch where lumpy clusters of frogspawn lay wedged between stepping stones. With no rain, it became tide-bound, so I gathered the gloopy mass into a bucket and brought it home to my galvanised farm water trough.

Even without drought, only a small proportion of tadpoles survive. A female frog, Rana temporaria, lays up to 2,000 eggs, many eaten by newts, fish or dragonfly larvae. The jellied blobs that I brought home quickly became little black commas in transparent zorbs. A couple of weeks later, the first tadpoles hatched, dark sperm-like shapes of just mouth, gills and tail, their food the jelly that protected them. They then ate algae, ranged up around the sides of the trough with occasional vigorous wiggling of tails. 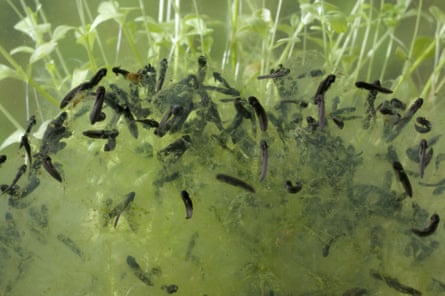 Tadpoles are vegetarian at this stage so I gave them boiled lettuce, which they scraped at with rasping jaws. When startled by my shadow there’d be a frantic scrabble as they dashed for cover, making the water seethe. Sometimes they’d hang upside down and I could see mouths opening and closing, a neatly coiled spiral of guts through translucent bodies. Close-up binoculars revealed their beautiful skin, speckled with shimmering golden spots, eyes bronze with dark centres.

In this time of focusing on things close to home, others were finding fascination in rearing tadpoles: Hannah McSorley’s videos led to the County Tyrone teenager becoming a “TikTok tadpole influencer”.

The development speed of tadpoles is related to water temperature, but it’s generally after about a month that they lose their gills and develop teeth. They then become carnivorous, eating small insects. I fed them fish flakes, leaving it in the shallows where bogbean grows in gravel. 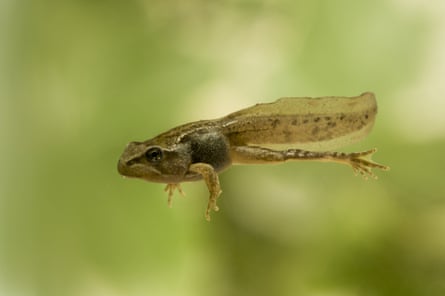 Hind legs developed next, with finely splayed toes. Then front legs broke through the skin, and they were recognisable as near-froglets. They reabsorbed their tails and in late July the first was ready to leave the trough down a wooden ramp. Others are following, off to eat the slugs and snails in my wildlife garden.