‘The aliens to watch’: how the humble earthworm is altering the Arctic

They are a gardener’s best friend, good for the soil and a treat for birds. But the humble earthworm may not always be good news, according to a study that suggests invasive earthworms could be making Arctic soils too fertile.

The earthworm is not typically thought of as an invasive species. “Most parts of Europe have earthworms so we never really saw them as a problem,” says lead researcher Dr Gesche Blume-Werry, an ecologist from the University of Greifswald in Germany. But Blume-Werry and her colleagues realised that “more and more spots in the Arctic have worms because humans brought them there”.

Earthworms move at around five to 10 metres a year in the Arctic, but human mobility means they can jump from the UK to Svalbard in a single move. They are reaching remote areas by hitchhiking in the treads of people’s shoes, from being used as bait for fishing and in imported soils for gardening. As the Arctic warms, they are able to colonise more areas.

Early research indicates that the earthworms could have the same effect on Arctic plant productivity as a 3C rise in temperature.

Typical Arctic temperatures are too cold for decomposers like fungi and bacteria to break down organic matter effectively, causing a lack of nutrients in the soil, which inhibits plant growth. Now, scientists are realising the absence of earthworms is also a key part of the story because they unlock nitrogen, an important component in plant growth. 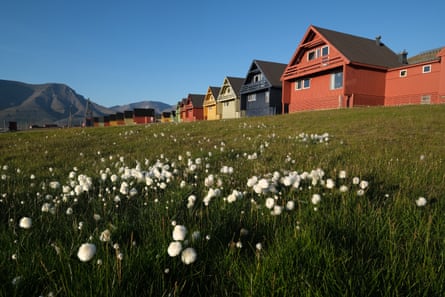 They do this by breaking down litter and humus, excreting it in their worm casts. Worms move nutrients down to where roots are, through networks of horizontal and vertical tunnels. Anecic worms (the most common in the UK) make vertical burrows and endogeic worms make horizontal burrows. Earthworms that just work on the surface (epigeic worms) don’t make tunnels and are not considered geoengineers.

Taller, scrubby plants (which have grown better due to nitrogen-rich soils) are more likely to stick out of the snow during winter, and scientists believe this could mean more heat is absorbed, accelerating snow melt.

“You have these changes in albedo [the reflective quality of a surface],” explains Blume-Werry. “If the surface is darker, which happens if plants are not covered in snow, then less light is being reflected and more heat is being trapped. You get this positive feedback to warming. The warmer it gets, the better plants grow, and then you have this kind of cycle of more plant production and warmer temperatures.”

In the northern boreal forests of Canada and the US, earthworms had been absent since at least the last ice age, 12,000 years ago. But as settlers from Europe colonised these lands, they brought earthworms with them in the ballasts of ships and on imported plants. Slowly, these invaders changed the forest ecosystem by converting leaf litter into humus. This altered the delicate relationship between fungi and plants, which changed the pH of the top layers of soil, leading to reduced overall biodiversity, according to 2016 research published in Global Change Biology.

In 2017, a team of scientists went digging for worms in the Arctic. Associate professor Jonatan Klaminder, an environmental scientist at Umea University in Sweden, who was involved in the research, said he had assumed the climate would be too cold and harsh. He was wrong.

Initially, researchers looked at older sites where nomadic Sami people had gathered reindeer for milking between 1600 and 1900 but did not find any geoengineering worms. The first ones seem to arrive in 1850 when people came to the interior of northern Sweden to try to start farming in the Arctic – unsuccessfully, it turned out. At some of these old sites, earthworms had spread 800 metres away from where humans lived, according to the paper, published in Biological Invasions. In total, earthworms were found at around 20 sites. In some spots the worms were found in even greater abundance than in the forests in Minnesota, where they are considered a serious problem. 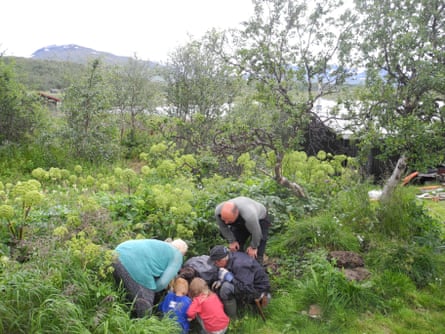 Arctic soils around this area generally have 10cm of poorly decomposed organic material, but at the 19th century site in northern Sweden the organic layer on top of the soil and leaf litter had disappeared, just as it had in the northern boreal forests in the US. Most of the spots in which earthworms were found were near human settlements such as old farms, cabins, gardens or fishing sites, which reinforced the idea they were brought in by humans.

Geoengineering earthworms have now established themselves in Arctic soils in North America, Greenland, Iceland, Fennoscandia, and Russia. In the paper scientists warned earthworms “may pose a potent threat to some of the most remote and protected Arctic environments in northern Europe”, and called for immediate action, as the worms are almost impossible to eradicate once they have colonised.

Klaminder says the research is a canary in the coalmine. “During the past 10,000 years we have not had geoeningeering earthworms in the landscape. And suddenly if we introduce them this will change how the system functions, so that’s why we’re seeing a strong impact … If you have 10,000 introduction points then this could be a very rapid process.”

In the latest experiment, Klaminder, Blume-Werry and colleagues wanted to find out what these earthworms do to plant growth. They put soil in containers, or mesocosms, that were 50 x 39 x 30 cm and filled them will heath and meadow vegetation. The containers were kept at Abisko Scientific Research Station, which is 200km north of the Arctic Circle. 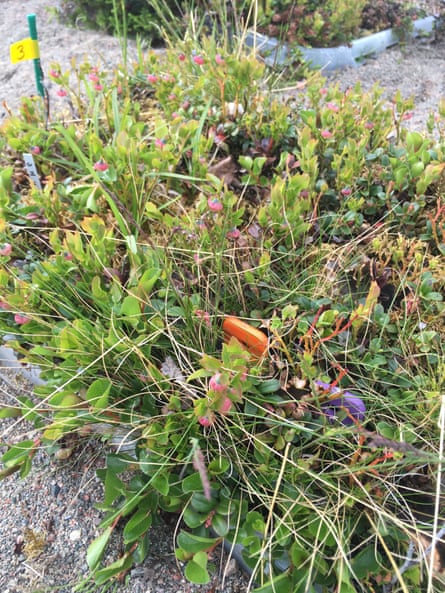 Around 45 worms were added to half of the mesocosms. To determine root growth scientists put a camera in the soil that took photos of the roots at regular intervals. The “greenness” of vegetation (a measure of photosynthesis and therefore plant productivity) in the different containers was also monitored to work out how much impact worms were having.

The effects caused by geoengineering earthworms were “as strong, or even stronger, than other important environmental drivers in the Arctic”, such as temperature increase, grazing animals and fertilisation using deer faeces, researchers wrote in their paper on the experiment, published in Nature Communications.

Earthworms increased plant nitrogen concentrations on average more than three times as much as a 3C increase in summer temperatures. They caused an increase in plant greenness that appeared similar to the increase caused by a 3C temperature rise. Blume-Werry said the researchers were “super surprised” by the scale of the impact.

Earthworms are not the only invasive species threatening the Arctic. Polar limitations of where species can reach are quickly eroding. In the summer of 2008 scientists sampled the footwear of 259 travellers arriving in Svalbard by plane. They found an average of 3.9 seeds per traveller, which equates to 270,000 seeds for the entire year, according to the team’s paper, published in Biological Invasions. A quarter of the seeds collected germinated under local conditions.

Polar and alpine ecologist Jesamine Bartlett from the Norwegian Institute for Nature Research says there are approximately 8,000 individual dandelion plants that have been creating “enormous lawns”, she says. “What’s alarming is that a couple of years ago there weren’t that many. They’re visually very striking. Every year it changes slightly depending on how warm the summer is.”

Earthworms are also probably a lot more widely distributed than we think, says Bartlett, but there are few specialists working in this area. “I don’t think we’re aware of it at all,” she says. “Some of the major activity in Svalbard has been going on for decades. It’s very likely this could have spread further and no one has done a basic survey of just running through the most populous towns and gone through it to see what is there.”

Detritivores, including earthworms, are some of the most damaging invasive species you can get because if people don’t see them they don’t think they’re a problem. They change the foundations of ecosystems and set a precedent for other invasive species looking to move in. “They are the aliens to watch. Don’t be distracted by the big glossy, invasive plants. See what’s happening in your soil,” says Bartlett, who has set up a “stop Arctic aliens” website to raise awareness about the importance of making sure visitors do not accidentally bring in unwanted species. 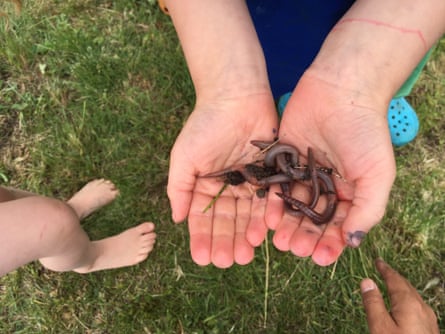 Research in this area is still in its infancy, says Marc Macias-Fauria, an ecologist from the University of Oxford who was not involved in these studies. The mecocosm research by Blume-Werry et al was creative, smart and timely, he says, given Arctic ice melt and increasing numbers of humans in the region. It would be interesting to see how growth varies in different Arctic environments, he adds. “The discussion is engaging and exciting but this is a first stage, there are many more questions in front of the paper than behind it”.

In general, big Earth systems – ways of modelling the interacting physical, chemical, and biological processes of our planet – do not look at the impact of animals and vegetation on the land . Instead, models looking at vegetation are usually dictated by research on the climate. There is only one climate model – the Madingley model in Cambridge – that looks at the impact of animals. Macias-Fauria says encouraging more of these big models to incorporate the role of animals is “definitely very welcome”.

Dr Bonnie G Waring, an ecologist at the Grantham Institute, who was not involved in the research, says it highlights how humans change natural ecosystems in myriad ways, not just by burning fossil fuels. “The Arctic is experiencing multiple perturbations that could lead to rapid and profound restructuring of high-latitude ecosystems, and we need to study these disturbances in a holistic way,” she says.