Clouds rise above the line of tall trees and stretch out to sea. Below my feet, a muddy channel of water runs from a sluice towards the marsh. Redshanks circle, calling “kip-kip-kip“, and two small common sandpipers – brown above and white below – bob and bow, feeding in the mud. As I walk along the path on top of the flood bank, skein after skein of Canada geese fly over my head, barking to each other, the air whooshing under their wings as they flap. The geese splash on to the pools near the beach. More and more arrive as I watch, paddling to the muddy islands, squabbling and preening. Somewhere across the marsh, I hear a curlew’s cries rising into the air.

On one of the small islands, two spoonbills are sleeping, both standing, balanced on one black leg, their bills tucked under their wings on their backs. They appear serene, ignoring the noisy geese around them. Spoonbills stop here regularly in the autumn. It’s possible that these birds are migrating from one of the few small breeding colonies further north in the UK, such as in Norfolk, or they’ve come from across the Channel, on their way south to their wintering grounds in western Africa.

One of the spoonbills lifts its head, uses its long, grey, spatula-shaped bill to preen itself briefly, and then settles back to sleep. Sand martins, house martins and swallows chatter and swirl above, taking insects over the pools, before flying out to sea. A larger, black bird with scythe-shaped wings – a single swift – follows them. 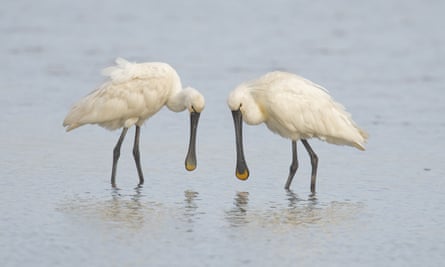 The clouds are parting to reveal bright blue skies. I turn to walk back. My movement disturbs two small grey birds with long legs and bills – they’re greenshanks, which breed nearby. They take off, calling in alarm and displaying long, white triangular patches on their backs. They leave behind a large curlew, stalking across the exposed mud, poking and probing the ground here and there. It suddenly plunges its long, curved bill down and heaves out a small, flailing black crab. The bird picks its way to a flowing channel, and washes the crab with a quick swooping motion, before deftly flicking it round in its bill and sliding it down into its mouth.