Country diary: how four crates can feed a hundred thousand

Spuds, tatties, taters – the time to unearth these magic tubers had come. Summer’s heaviest harvesting was under way in billows of dust, rolling tractors and trailer upon laden trailer bound for welcoming barns.

Almost five months before, I had stood at this same field corner looking over newly ploughed soil, the fine tilth sculpted into a corrugated landscape of hillocks and hollows. A pair of yellow wagtails flitted from top to top, and in any other year those lemony migrants from Africa would have been the highlight of my walk.

But that day I gained more exhilaration from a quartet of wooden crates parked at the end of the field. Each of the waist-high tubs was filled to the brim with seed potatoes, and each peach-sized pellet was destined to be sunk into the raised banks of soil and grow offspring a dozen or so times its own weight. On that day, when the supermarket shelves were empty of flour, pasta and rice, and in that period of perpetual doubt, I glowed in the certainty that, come autumn, there would be still be mash for tea. 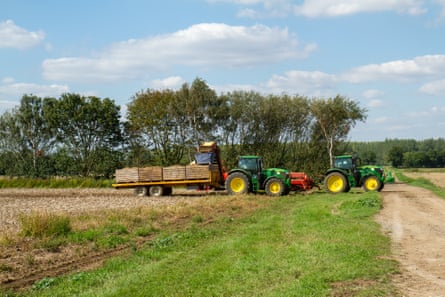 Over spring and summer, I nursed this crop with my eyes, watched it watered by farm irrigators and downpours. I walked its length and width to estimate how many potatoes lay beneath. When the plant tops were raked off by tractor, I knew there was a fortnight to go, 14 days for the buried skins to harden.

Two tractors came down the lines in parallel. One was a taker, the other a receiver. The former, with wheels in the gutters on either side, used spinning wheels to throw up the banked earth into a pouch. The contents bounced on to a quaking conveyer belt, which shook off the soil, and nudged the potatoes up its crane-like stem. At the end of the belt, a funnel sent a continuous stream of tatties raining down into a trailer pulled by the accompanying tractor.

Two small potatoes had spilled out on the concrete track. They were in the path of huge tractor tyres that would crush them as they turned. I scooped them up – just enough for a lunch. In the field before me were a hundred thousand dinners.