There are precious few September mornings as perfect as this on the fell tops: windless and warm, with, after heavy rain, crystal-clear views over most of the dale. Ahead of us, across the moor, is a grove of old beech trees known locally as the Elephant Trees.

Alongside the stony track, thistle seedheads had burst, filling the air with thistledown, aerial plant plankton drifting skyward on rising air currents. A buzzard, launching from the top of a Scots pine, flapped low over the heather, before it too picked up a thermal. It soared, without a single wingbeat, joining two more, circling ever higher until lost from earthbound sight, seeming to dissolve into the blue. 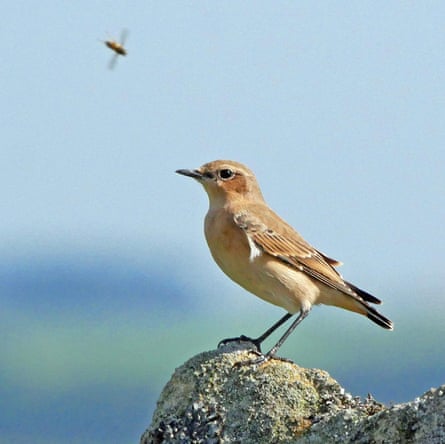 The heather, past peak flowering but still a sea of purple shimmering in heat haze, teemed with mining bees, Colletes succinctus. They had dug their tunnels in the sandy soil, sometimes in colonies of several hundred, shuttling across our path, carrying pollen to provision nests. Small tortoiseshell, small copper and red admiral butterflies nectared on heather flowers. And, everywhere, dangly legged craneflies fluttered just above the blossom.

Curlews that bred here in early summer are long gone; now this high moorland is the province of smaller birds attracted by the abundance of insects. A juvenile stonechat, perched among the flowers, flicked its tail at us as we passed. Young wheatears swooped down from their drystone wall perches, returning with beaks full of insects.

By noon, clouds had bubbled up on the horizon, bringing a welcome breeze as we rested against the wall at the Elephant Trees. Some say their name relates to their wrinkled, pachyderm-like grey bark, others that this wind-sculpted landmark, visible from almost everywhere in the lower dale, calls to mind a herd of elephants trundling along the horizon. 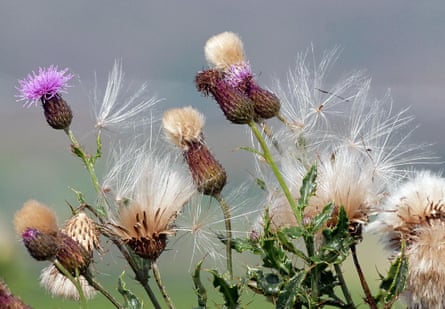 Swallows, racing towards us from the pastures far below, hurtled over the trees then skimmed low across the heather, filling their crops with craneflies before they resumed their southward migration. By the time the last heather flower fades, and the first frosts bring to an end this insect abundance, some may be flying over African savannahs, among real elephants.