‘Money is worth nothing now’: how Lebanon is finding a future in farming

On the side of the Baanoub valley in southern Lebanon, half an hour’s drive from the coast, Yasmina Zahar stands surrounded by olive trees with thick, sturdy trunks. Planted in Roman times, once tended by monks, they are now cared for by Zahar and her husband, Jean-Pierre, who also grow vegetables, fruit and flowers.

“It’s beautiful to see the result of what you produce, to hold it in your hands and taste it,” she says.

“It took us 10 years to become farmers. That’s when we started to understand what the trees need and when to plan for next year,” Jean-Pierre says. 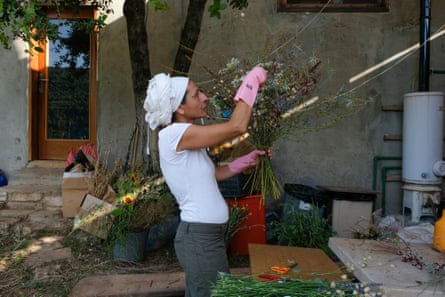 The architect and former TV producer are among a new wave of, mostly young, Lebanese farmers. Part of the ancient Fertile Crescent, Lebanon is a place abundant with crops, from figs and cherries to wheat.

But food is no longer taken for granted in the country.

Long before the Covid-19 pandemic and the devastating explosion in Beirut on 4 August, Lebanon was already deep in economic crisis. Its currency has now lost more than 60% in value and purchasing power has dwindled. Food prices increased as much as 367% in the past year, and the UN recently said that more than half of Lebanon’s population is now trapped in poverty, double last year’s rate of 28%.

In April, the social affairs and tourism minister, Ramzi Musharrafieh, said that 75% of the population needs some kind of aid; Save the Children recently said that half a million children in Beirut don’t get sufficient food.

Planting pots with herbs is not going to make any difference in nutrition. We need to change the nature of the system

For many, farming is emerging as a solution. “Suddenly I meet a lot of people who are growing on their balconies and in their backyards. I feel very hopeful about this,” Corinne Jabbour, a permaculture designer, says.

“They gave us seeds and seedlings, even brought people to teach us how to plant. My mum was surprised how fast the lettuce grows and how much it tastes,” says Ghadir Hamadi from southern Lebanon. 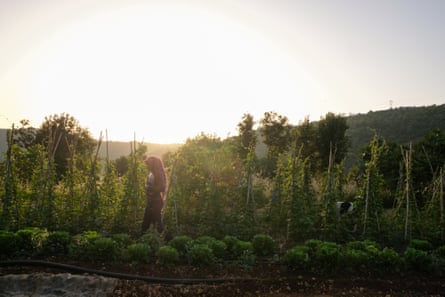 Hamadi spent the lockdown period in her family’s house in the countryside. But close to 90% of Lebanon’s population live in cities, without access to land or gardens. In Beirut’s Palestinian refugee camp Burj el Barajneh, among the densest areas in the city, a group now plants vegetables on roofs.

In another part of Beirut, also surrounded by high buildings, Souad Abdallah walks around among the plants on her rooftop. There are varieties of salad, tomatoes and edible flowers. In one corner, Hadi Deaibes and Dahna Abou Rahme, who together with Abdallah form the agriculture collective Kon, construct a wooden bed for planting.

“It all started during the revolution. I felt the need to do something constructive. I wanted to work with the community and invest in something sustainable. 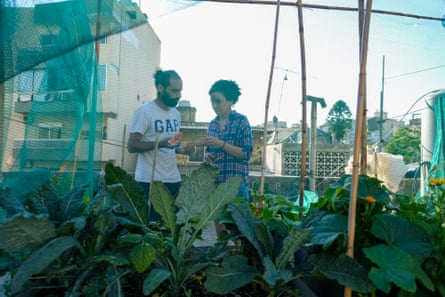 “We follow permaculture philosophy and take into consideration the surroundings. We use compost soil and grow what can be grown in the city,” Abdallah says.

The group were lucky – their roof garden was not damaged in the explosion.

“We are contributing from the small donations we get to help with things like medication and doctors’ consultations.”

Rami Zurayk, a professor of ecosystem management at the American University of Beirut, says developing a relationship with soil has positive effects on people’s wellbeing. “We are waking up now to see that what we thought we had is no longer here. People have money in the bank that they cannot use. Going back to the primordial – land, seeds, food – is cathartic.”

But small initiatives will do little to solve food security, he says.

There was never any support to farmers. And now they are saying go and grow your own food

“Someone planting pots with herbs is not going to make any difference in nutrition. We need to change the nature of the system, to treat food as a human right, not a commodity.”

Lebanon is not alone in facing a food crisis. The World Food Programme warned that Covid-19 could almost double the number of people facing hunger, from 130 million to 265 million. Agriculture has been disrupted all over the world, seasonal workers stuck behind closed borders. Lebanon, home to more refugees per capita than any other country, does not face that issue – the main agricultural workforce here is Syrian refugees.

“We can’t go back to Syria because of the war, but we are working as usual,” says Hudoud el-Wakaa, an agricultural worker.

Migrant workers, who depend on sending income home to their families, are among those hit hardest. Kamal Mia, from Barisal in Bangladesh, sells vegetables used in many Asian cuisines: spiky bitter gourd, pink lychee fruits and heavy bottle gourd. All grown near Beirut. 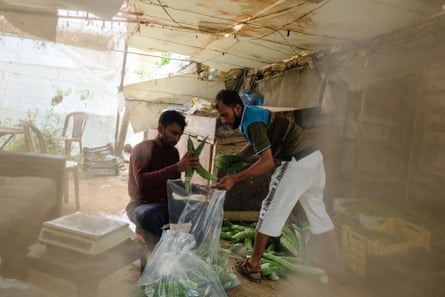 “We bring seeds from Bangladesh and plant them here. Each weekend I sell 30-40 kilos of okra and 50-60 kilos of bitter gourd,” he says.

“But the last five months I haven’t been able to send anything. The money is worth nothing now, zero.”

Lebanon imports 60-80% of the calories it consumes (compared with the UK’s 50%) and is only self-sufficient in fruit. Wheat, the basic staple, is imported from countries including Russia and Ukraine. Lebanon is one of the world’s most densely populated countries and does not have the space to grow everything it needs. 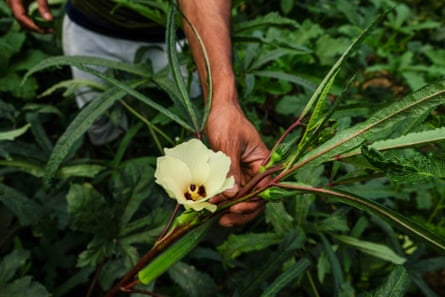 Government support for agriculture is low, too. The cultivation of medicinal and industrial marijuana was recently legalised, in an attempt to generate more exports. A number of food products are currently subsidised, but these state subsidies might end in November.

“There was never any support to farmers. And now they are saying ‘go and grow your own food’. What we need is campaigns to support the farms that already exist,” says Michel Maasri from Shams, a permaculture farm in the mountains north of Beirut.

In Baanoub, the Zahars spent more time than ever this year in the fields. Yasmina carries seedlings to plant near the olives. The trees are not straight, she says, but planted in irregular lines.

“Our generation doesn’t operate along straight lines either. Not like previous generations. For us it is natural to shift focus and start farming in the middle of life.”

Who will clean up the ‘billion-dollar mess’ of abandoned US oilwells?

Why Bitcoin is so bad for the planet – video explainer

Set children free: are playgrounds a form of incarceration?