Mere glitter dazzles between air and water, disrupting shadows of the surrounding woods, distracting the eye, hovering over occult secrets underwater. The outer world is sedated by bright autumn sunshine while under the surface is a troubled subconscious that gives the place the “discouragement”, the “unbreathing quiet” that Mary Webb attributed to the fictitious Sarn Mere in her novel Precious Bane.

Colemere is one of a sentence of meres written by dying ice at the end of its age 10,000 years ago. Down in the thick of the water are woods of weed haunted by carp, and fates with names such as “Jenny Greenteeth” that pull you in.

Along the shoreline, where whirligig beetles draw orbital ripples, roots the least water lily, Nuphar pumila, which is similar to the yellow water lily but much smaller; its floating leaves have a bay in them, its stigma discs are starry and remain at the ends of brandy-flask seedheads. This little colony is a relict population; the next nearest to Colemere is in Scotland. They are marooned from the glacial story in a kind of magical substance between land and water, an ecology surviving in Shropshire’s meres and mosses, and now hanging on in the Anthropocene’s red list of endangered species.

The water lily needs acidic water, open skies and glittering sunlight, and is doomed by the encroaching shoreline shadow of trees, toxic run-off from fields and canal spill. Some years ago, such pollution killed swan mussels, Anodonta cygnea, beautiful 20cm oval shells, like clasped cigarette cases, concealing the gentle sole of a creature that walks underwater; it is hard to imagine a more fragile innocence poisoned by our spit. 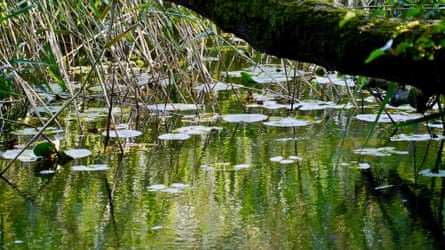 The pixels of mere glitter can change into dragonfly or goldeneye, snipe or pochard; their twinkle is forever new, as if the place “was created but an hour gone, and not created for us”, as Webb says. A heron stands with studied indifference at the sailing club compound of parked dinghies, neatly sheeted to stow their playfully nautical traditions and the thrill of capsize. The mere is all so peaceful-looking but it is a place where “the moon would get lost in lily leaves, and times, a heron might stand in the sun”.

Going for green: how to shop more ethically on Black Friday – in pictures

Charmed in lockdown: garden birds by Denis Thorpe – in pictures

If bugs escape I’m a Celebrity ‘they could cause severe problems’, says Chris Packham

‘You have stolen our forest’: rights of Baka people in the Congo ignored