The leaves wither and face down as if to escape the sun; the roots darken and rot. Then the leaves fall: within 10 days, all of them are gone, leaving the fruit under the sun. Within one or two years, the plant dries up and dies. There is no cure.

In Italy, kiwi trees are dying en masse, and no one knows why. Last month, the Italian government announced a taskforce to study a mysterious sickness that is devastating kiwi orchards in the country, leaving scientists baffled. “Damages to production are causing serious suffering to farms,” the agriculture minister, Teresa Bellanova, said, calling the situation an “emergency” and saying the country needs “help from all the experts”.

After breaking out near Verona in 2012, the syndrome, which farmers call moria, or “die-off”, has ravaged areas where kiwi trees have thrived for decades. Recent estimates suggest that it now affects 25% of kiwi orchards in Italy, the world’s second-largest producer of the fruit – above New Zealand and below China – and is causing losses worth hundreds of millions of euros. In some farming hotspots, the number of affected plants rises to 80%.

Yet researchers say the real numbers could be even higher. Because the syndrome starts in the roots, it can spread unobserved until the first leaf symptoms. By then, the decline is already too advanced. “It’s like the coronavirus, if you will: when the symptoms appear, it’s already too late,” says Gianni Tacconi, a genomics researcher with Italy’s Council for Agricultural Research and Economics (Crea), who has studied kiwi fruit since the early 2000s. “It’s difficult for humans to heal; for kiwi trees, I’d say it’s impossible.” 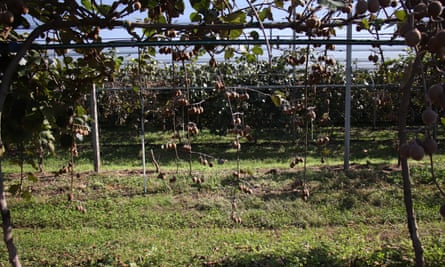 Researchers have looked for the cause in irrigation practices, bacteria, fungi, soil composition and specific replant disease – but found no clear culprit: the more they studied, the more anomalies cropped up.

The syndrome has struck old and young trees, on virgin soil and decades-old farms, killing trees at lightning speed but sparing others a few yards away. Nothing seems to stop it. Studies have found a kaleidoscope of different pathogens in sick trees – but none was present in every ailing plant.

Scientists believe that several factors: water, soil oxygen levels, global heating and fungi, are in play, but they can’t explain how, or why the sickness exploded in areas where kiwi farming used to be easy.

“It’s very difficult to study something like this,” says Lorenzo Tosi, a researcher with research company Agrea. “When we want to understand the cause of something, we try to isolate it and run an experiment. But that doesn’t work this time because several factors are in play […] Everything seems to contradict something else.”

Beyond the syndrome, he says there has been an acceleration in serious plant diseases in Italy. A mysterious sickness seemingly linked with warmer temperatures has killed many apple trees; a fungus has decimated this year’s pear harvest; the southern Puglia region is grappling with a bacterium threatening to wipe out olive trees. “There are signs that something is putting a strain on crops,” Tosi says. “I have the impression kiwi trees might just be the first of many.”

Researchers have observed similar decline symptoms in kiwi orchards in France, Spain, Greece, Turkey, Japan and China, but nowhere have they been as explosive as in Italy. Around Verona, the syndrome has struck down 84% of trees.

“This year, everything died,” says Corrado Mazzi, a farmer whose orchards near Verona are ailing. In the area, farmers have started to abandon kiwi fields, and empty structures make for ghostly sightings from the roads. Mazzi has been growing kiwi trees using the same techniques since the mid-1980s until the first symptoms of moria appeared in 2012. The severity of the syndrome would become apparent very soon. “Between 2014 and 2015, we lost everything,” he says. 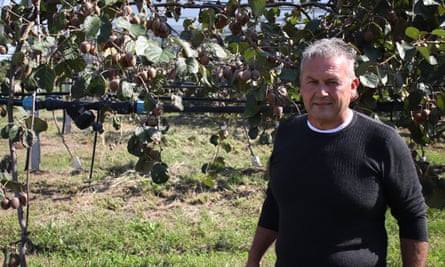 Mazzi uprooted all his trees in 2015 and followed the best farming practices, then planted new ones between 2016 and 2018. The moria came back. “You can try all you want but nothing changes,” he says. “In two or three years, you are back to the start.” His production is down 75% compared with 2010 and 2011.

With answers lacking, some researchers have suggested that the climate crisis might be behind the decline, weakening the trees and altering soil equilibrium. Some studies suggest that the ideal temperature for growing kiwi trees is between 25C and 27C – but global heating and recurring heatwaves push summer temperatures up to the mid-30s for more than a week at a time in Italy.

“I still have a lot of data to analyse, but everything seems to point in that direction,” says Laura Bardi, a soil microbiologist at Crea whose team is studying the effects of rising temperatures and other environmental variables on kiwi trees.

Most researchers agree that rising temperatures and extreme rainfall put a strain on kiwi trees, but some say more research is needed to prove they are its primary cause.

Bardi is less cautious. “I’ve become convinced that climate change is the main factor; if we study this aspect in-depth, I think we’ll find the causes,” she says.

“Among these poor olive trees, I’ve seen that some producers have started to grow mangos and papayas,” she says. “Who knows? Perhaps growing tropical fruit is the way forward in Italy.”