More tigers are now held in captivity in the United States than survive in the wild in Asia. That is the grim statistic that underpins Americans’ growing appetites for posing for pictures with big cats and their offspring, a desire that is today being met by thousands of tigers that are caged and displayed in private roadside zoos across the US.

Young tigers are taken from their mothers just after their birth and bottle fed and handled by humans. Then they are used as props until they are about 12 weeks old when they become too dangerous to hold. Many develop bone and joint problems because they were removed so early from the adult female and not given proper nutrition. At the same time, mother tigers are returned to cages to provide future supplies of cubs. “This is done repeatedly,” says wildlife photographer Steve Winter. “It’s inhumane.”

For the past two years Winter has tracked the fates of tigers across the US and recorded scenes of their confinement, maltreatment and exploitation. Some of the most powerful of these images will be highlighted this week when a portfolio of his tiger photographs receives a special commendation at the Wildlife Photographer of the Year awards at the Natural History Museum, London, on Tuesday.

Winter told the Observer last week that some roadside zoo customers will spend several hundred dollars on visits to tiger enclosures where they can handle young animals and pose with older ones. When challenged, these individuals will often justify their behaviour by saying the zoos were helping to conserve animals, he added. 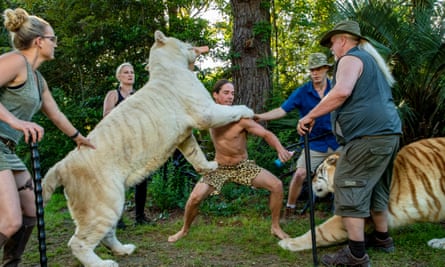 “The idea of anything of conservation value coming out of these roadside zoos is just not true,” said Winter. “There is none at all. This is a business operation. These animals have their dignity taken away from them. You get to see a beautiful animal, but it doesn’t act like a wild tiger – it doesn’t know what wild is.”

Nor is the US’s breeding business confined to one or two problem areas of mid-America, Winter stressed. His portfolio includes shots that were taken in Illinois, Oklahoma, Montana, Denver, Ohio, and South Carolina. “These animals are being displayed all over the place. Yet this is an endangered species.”

And the huge success of the Netflix series Tiger King, which exposed some of the worst excesses of the industry through the story of zoo owner Joe Exotic, has – ironically – only intensified that appetite in the US, it appears. “There was a huge surge in interest after the programme. If it had not been for Covid, things would have gone through the roof,” Winter added.

The six photographs in his portfolio include images of young tigers looking emaciated and ill. In others, taken at Tiger Safari, animals are made to perform circus tricks, some are made to pose in swimming pools with humans. “It’s actually cheaper and easier in most states to get a permit to display exotic animals than it is to adopt a dog or a cat from a rescue centre,” he said. 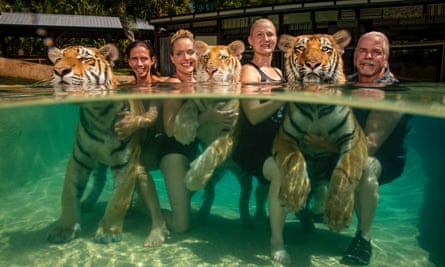 Winter said it was vitally important that people understood what is happening to tigers, not just in the US but in other countries. “The big cat breeding industry is growing across the world. For example, in South Africa increasing numbers of tiger farms have led it to become the number one exporter of live tigers in the world. And there are operations in eastern Europe as well.

“A lot of these organisations say they give money to conservation and help preserve tigers. Well, they might give a few hundred dollars once a year or so but don’t forget they may be making $50,000 a day exploiting big cats.”

In the US a Big Cat Public Rescue Act – which would effectively bring an end to its tiger breeding business – is under debate in congress. Supporters say it would stop the use of cubs as photo props and would take away the incentive for speed breeding of tigers. “But with our political system right now, who knows if that will ever happen,” said Winter.