Why the death of a small, punk-like fish rocked the marine world

In 1802, when French naturalist Francois Peron slipped a small, chunky Australian fish into a jar of preservative, little did he suspect that his unassuming prize would be the only member of its species ever known to science. The smooth handfish (Sympterichthys unipennis) was declared extinct by the International Union for Conservation of Nature (IUCN) Red List earlier this year. This strange and spiny bottom-dweller made history with its passing. It became the first marine bony fish to be listed as extinct in modern times. Today, all that remains of the species is that discoloured specimen in the Natural History Museum in Paris.

Scooped up off the coast of south-east Tasmania, Peron’s catch was one of the 14 handfish species living in southern Australian waters at the time. The relatives of the smooth handfish are a colourful family which crawl around the seafloor using adapted fins as “hands”. They look like grumpy ageing punks, each sporting a dorsal fin over its head like a mohawk, bulging eyes and a cantankerous expression. 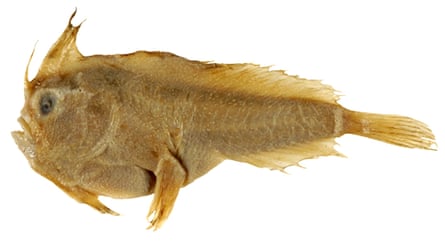 As a family, they have a lot to be grumpy about. Since colonisation, human activity has caused their numbers to plummet. Seven species have not been seen for more than 20 years and three Tasmanian species, the spotted, red and Ziebell’s handfish, are listed as critically endangered.

“The smooth handfish must have been relatively common to be among the first species collected on the continent,” says Prof Graham Edgar, a marine biologist at the University of Tasmania, whose work contributed to the IUCN listing. With no living specimens to study, Edgar and his colleagues have had to infer much of what we know about the species from Peron’s records. 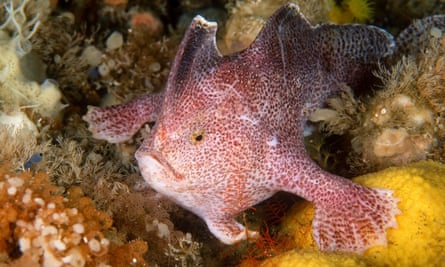 Peron was on board the Geographe, a vessel fitted out for research that was captained by Nicolas Baudin and sent to the southern continent by Napoleon. Collection methods were limited to lines, shallow water dip nets and seine nets. “No handfish has ever been caught by line,” explains Edgar, meaning the fish was most likely to have been caught with a seine or dip net, suggesting it was a shallow water species.

If smooth handfish were so plentiful that Peron could easily scoop one up in his net, why did they disappear?

“It’s not possible to single out this or that particular cause,” says Edgar. However, he believes that historical dredging for scallops and oysters, sediment runoff from industry and climate change are the most likely causes for the extinction. Local ecosystems have been dramatically degraded by these factors. “About 40% of shallow reef species in southern Tasmania are showing rapid population decline, the whole marine system in the south-east has changed substantially in the last 100 years,” he says. 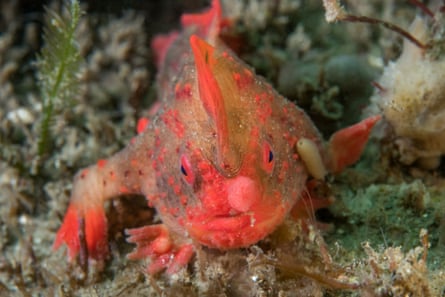 With sea temperatures increasing at about four times the global average, climate change is hitting south-east Tasmania hard. This has created what Edgar describes as a “climate trap” for coastal marine life. As warm water moves south, species that require cold, shallow water are losing habitat. “The loss of the smooth handfish is potentially part of a much bigger issue, as a large number of other species have dwindling populations and are heading towards extinction in this cold temperate location.”

Extinctions are often caused by cumulative factors, agrees Dr Tim Lynch, former chair of the National Handfish Recovery Team (NHRT) and a senior researcher at the Commonwealth Scientific and Industrial Research Organisation. When musing on the smooth handfish, he points to the destruction of the shellfish reefs which were once a dominant feature of south-east Tasmanian seas. These reefs were ripped apart by a rapacious oyster and scallop dredging operation in the early 20th century. 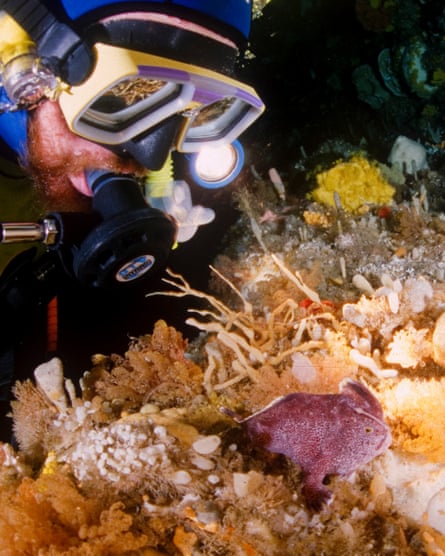 The catastrophic biodiversity loss witnessed by this region was revealed by comparing core samples taken from these dredging sites. Sediment samples from 1890 show a mean of 21 bivalve species, whereas the 1990 samples contain a mean of seven.

The shellfish industry collapsed within decades, but Lynch explains that the reefs’ capacity to recover has been hindered by the northern Pacific sea star (Asterias amurensis) – a ravenous, predatory species, introduced via ship ballast to southern waters. “That’s the habitat that the soft sediment species of handfish would have thrived in, but it’s gone now,” Lynch says.

Although the smooth handfish had not being sighted for more than 200 years, it took Edgar, Lynch and their colleagues decades of doggedly surveying the marine diversity of southern Australia before they were confident beyond reasonable doubt it was extinct.

Until recently there was always the slight hope that there might be a remnant population or individuals clinging to survival. “If the smooth handfish were a mammal, bird, reptile or plant it would have been listed as extinct years ago. Because it was a marine species there’s always been that element of doubt,” Edgar says.

The last smooth handfish probably perished decades before the species was declared extinct, which raises the question: have other marine fish gone extinct without us knowing? 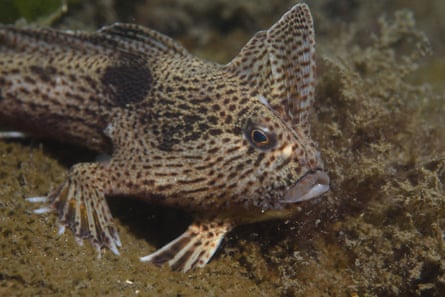 “Almost certainly,” says Lynch. “The likelihood that [species] have not come to the notice of western science before they have become extinct is quite high.” This is because marine biodiversity is so broad, and surveying the sea is a harder task. He emphasises that marine plants and invertebrates might also be in more trouble than records such as the Red List suggest.

Edgar agrees that a lack of data might be veiling the true extent of biodiversity loss in the ocean. He points to more thoroughly researched marine life such as corals, sharks and groupers. He says: “When you look at these groups the number of threatened species is actually similar in the sea to on land.”

The underrepresentation of marine fish on the Red List has led to the comfortable assumption that marine fish are in less trouble than their terrestrial and freshwater counterparts. The landmark listing of the smooth handfish as extinct shows us that the ocean is not too vast to be touched by the extinction crisis.

Pig in clover: how the world’s smallest wild hog was saved from extinction

Call of the rewild: releasing Britain’s rivers to ease flooding

Are poison-packed drones the answer to eastern Australia’s mouse plague?

We’ve been hibernating with our sorrow, but nature won’t let us grieve forever | Rhiannon Lucy Cosslett