From concrete to jungle: cartoonist puts Mumbai’s wildlife on the map

An Indian Ocean humpback dolphin swims beneath an Indo-Pacific octopus close to the coast, a gargantuan atlas moth flutters above Sanjay Gandhi national park, while an Asian palm civet shins up a tree near Vasai Creek and a black kite soars over a banyan tree. All are part of a vibrant new map of Mumbai that showcases the Indian city’s rich biodiversity.

“Most people only think of Mumbai as a concrete jungle, with skyscrapers, slums and beach promenades, but scratch beneath the surface, and you will find a place of rich biodiversity,” says Rohan Chakravarty, an award-winning wildlife cartoonist from Nagpur famous for cartoons that deal with the environment, conservation and wildlife, and creator of the Mumbai map.

After encountering a female tiger bathing at a waterhole in the Nagzira wildlife sanctuary in 2005, Chakravarty was inspired to switch from dentistry to the world of cartoons, launching his own series, Green Humour, in 2010. Over the years, he has created myriad cartoon strips, illustrations, maps and books that create awareness of environmental issues for a range of clients, including wildlife parks, tiger reserves and organisations such as WWF India, the Wildlife Trust of India and Pratham Books. 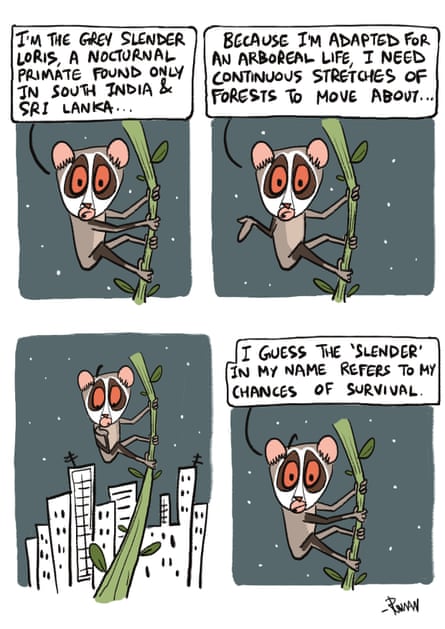 The goal of mapping Mumbai’s natural treasures was part of a campaign launched by the Ministry of Mumbai’s Magic, a new “climate action collective” of Mumbaikars and organisations such as the climate non-profit Waatavaran and entertainment company DeadAnt that use social power to protect “what makes Mumbai magical”. Last month they held a three-week digital festival, Biodiversity by the Bay, “celebrating Mumbai’s precious ecosystem”.

“The idea of creating this map was to instil a sense of pride and ownership in the city’s wildlife among the city’s youth, and sensitise the government to the importance of protecting this rich heritage,” says Chakravarty. The map also includes two of Mumbai’s important indigenous communities, the Warli and the Koli (one of the oldest fishing communities).

“From flocks of migratory flamingos in the Sewri mudflats to a rich marine life along the coast, birds from yellow-footed green pigeon to shaheen falcon, and even leopards in a forest in the heart of the city, Mumbai is a revelation,” Chakravarty adds. 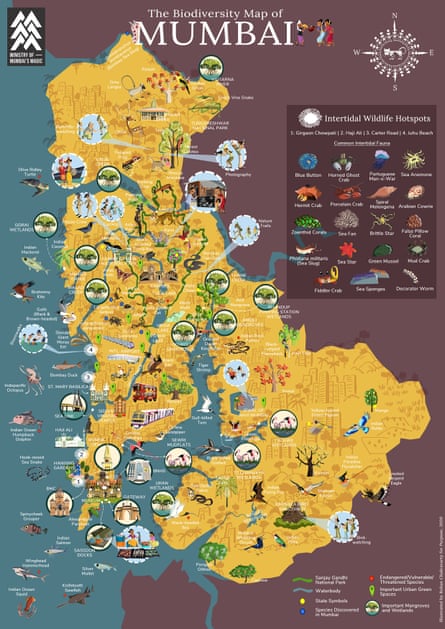 Mumbai, India’s financial capital and home to 20 million people, emerged from an amalgamation of seven islands, and a series of land reclamations. The loss of mangroves (vital in protecting the city from erosion) and deforestation are major environmental issues today. The city has lost 60% of its green cover in the past 40 years due to a growing population, rampant development, pollution and a narrow geography. Land reclamation has caused perennial flooding and devoured creeks, which acted as natural drainage systems.

A special section of the map highlights intertidal wildlife hotspots in places such as Haji Ali, Carter Road and Juhu Beach, thanks to the work done by Marine Life of Mumbai, an organisation that runs shore walks and educates the public about the hermit crabs, corals and sea anemones that run along the shoreline, not far from the busy roads.

The idea for the map was conceived by the Purpose Climate Lab (PCL). “This first map of Mumbai’s biodiversity is intended to connect Mumbaikars to their city’s riches,” says Sonali Bhasin, a senior strategist at the company. “It’s a map which we hope will be used in the city’s parks, or by the environment department of the government, or in schools and colleges, and generate awareness among Mumbaikars.”

She adds: “We intend to collect 5,000 signatures and write to Aaditya Thackeray, the state minister for environment with a list of demands, including asking for Mumbai’s biodiversity hotspots to be protected. The five-point campaign also includes a plan for protection of lesser flamingos and their habitats, acknowledging Aarey as a forest, and increasing the protection of Mumbai’s green cover.”

Usually Chakravarty visits the sites he is mapping to get to know and understand the terrain, but the Covid pandemic meant this was not possible. “I’ve had to rely a lot on secondary information. I referred to books, research papers on species being discovered and material online, and consulted researchers, marine enthusiasts, scientists and organisations in Mumbai to draw up the map,” he says. 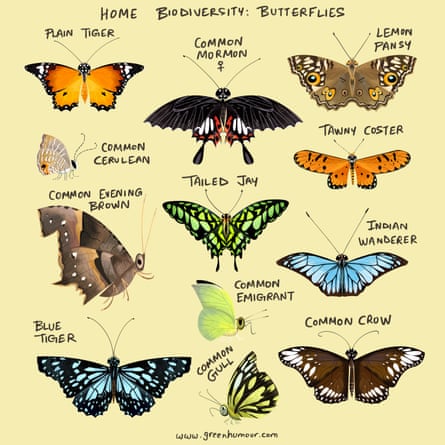 “Though I know a fair amount about Mumbai’s biodiversity and was familiar with spaces like Sanjay Gandhi national park and the mangroves, it was only when I was drawing the map that I realised that Aarey Forest (the favourite part of the map for me) … which has been at the heart of so much public activism, actually has four to five new species.

“Aarey is a treasure trove of birds, butterflies, amphibians and mammals. It is full of diverse microhabitats with arachnids and scorpions, two of which are even named after Aarey, and the gorgeous Giri’s geckoella, a leopard-spotted lizard.”

The map shows more than 95 species of flora and fauna found in the city, including plants, trees, birds, butterflies, mammals and reptiles.

We’ve been hibernating with our sorrow, but nature won’t let us grieve forever | Rhiannon Lucy Cosslett

Country diary: a dipper in the shadows of the Devon Expressway