‘I got it wrong. Since the changes it’s become more vibrant’: life in an LTN

When Newcastle city council planned to reduce motorist access to Acorn Road in the leafy suburb of Jesmond back in 2014, hardware store owner Steve Robson helped to raise a petition against the GBP350,000 scheme, organised meetings to oppose the plans and told a local newspaper that the proposed changes would be “devastating”.

The changes went ahead. And to date, Acorn Road has not been devastated. Far from it. Robson’s hardware shop – trading from the same small premises since 1912 – is doing so well that last month it expanded into an adjacent shop, doubling its floor space.

“I’ve been happy with the changes made to the street,” says Robson.

The campaign against the changes was ferocious. “We do not mind change to bring the area into the 21st century,” Robson said at the time, “but we don’t want to lose any of our parking spaces.” 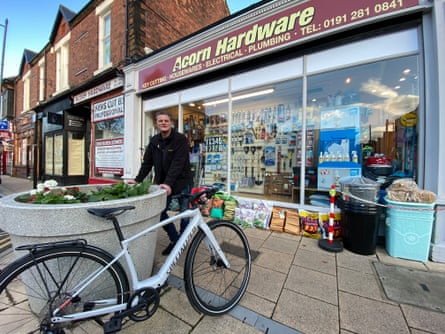 Council officers tweaked the scheme, but in the end much of the street makeover went ahead, including widened pavements, a contraflow for cyclists and the addition of a cyclist-only traffic light triggered by sensors.

It had been a two-way street, with rush hour snarl-ups and the odd contretemps. Now motorists can drive – slowly – only one way. Bollards blotted out several parking spaces; concrete planters and double yellow lines replaced others.

“Since the changes, Acorn Road has become more vibrant,” Robson says now. “With bike racks nearby, we get more cyclists coming in.”

We have to reflect as a city where our priorities lie, and they have to lie with vulnerable road users

In fact, if he was given the job of Jesmond’s transport planner, the Robson of today would be a touch more radical than the Robson of 2014. “I’d like to see seats and tables to give a sort of holiday feel.” He would even widen the pavements more.

So was his prediction that the changes would lead to the “death of Acorn Road” wrong? Robson laughs, and admits that yes, he got it completely wrong.

Heather Stronach was killed by a lorry driver on 2 November when cycling on Edinburgh’s Portobello High Street. The 36-year-old was the second cyclist to die at the same location within 20 months.

When Edinburgh’s transport and environment committee met to discuss a new LTN for the area, both deaths were raised. “We need a safer environment for those most at risk on our roads,” urged committee leader Lesley Macinnes. “We have to reflect as a city where our priorities lie, and they have to lie with vulnerable road users.”

But while Conservative councillors agreed with the sentiment, they continued to object and for the second time in as many months the committee was forced to refer the proposal to the full council. It’s yet more delay for a plan that has so far split the community.

Introduced in August as a temporary measure to encourage cycling and walking during the pandemic, the LTN scheme for East Craigs met with immediate opposition. An anti-LTN group – Get Edinburgh Moving (Gem) – crowdfunded a legal opinion which suggested the LTN was “unlawful”. 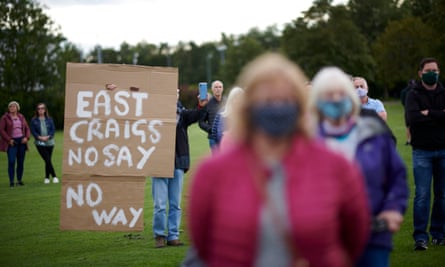 Gem chair David Hunter argued that, unlike elsewhere in Edinburgh, East Craigs has had no cyclist or pedestrian fatalities, does not suffer from rat-runs, and therefore does not need an LTN.

Back in August, the SNP’s Macinnes had promised that the East Craigs LTN would “create safe, people-friendly streets”.

The scheme is likely to get full council approval eventually, but will have to go out to public consultation, yet again kicking the can down the (still open) road.

Hunter told the Guardian: “East Craigs is already low traffic. The congestion problems are on the surrounding arterial routes.” Without the legal challenge “this hated and unnecessary LTN would have been imposed on the local community against its will”.

Cycling is a sustainable way of doing business, and it’s the way that all of us need to start thinking about getting around

But Janis Ross-Williamson, one of many local campaigners in favour of the LTN, was incredibly disappointed. She says that many roads in the area are “extremely busy” and there are problems with rat-runs and speeding. “I’ve lived here for 18 years, and the traffic has increased dramatically.”

She hopes there will be some form of traffic reduction in the end, which will mean “quieter, safer streets for all of us. When it’s there and some start to use it for more active travel then more people are likely to change their habits and see the benefits of the scheme … at least that is my hope for the community.”

Victoria Clasen delivers her flowers by bike. And for her Brixton-based flower delivery service Pop Florist, trade has been brisk since the LTN went in. “My sales increased, and my business has been busier than ever.”

Riding along Railton Road on her Urban Arrow e-cargobike, she is a rolling advert for a greener future: “When you see a bike like mine, filled with flowers, even the most steely, cantankerous Grinch will smile, because it’s a business that spreads joy.

“People recognise it’s a sustainable way of doing business, and it’s the way that all of us need to start thinking about getting around – we need to drive less, and LTNs can massively improve air quality and people’s health.” 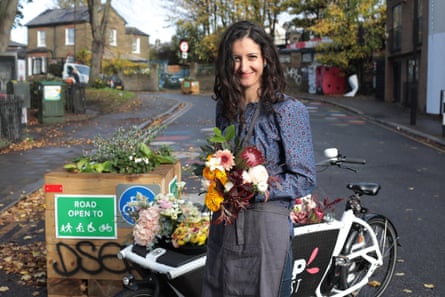 In April, Lambeth council introduced several LTNs in the south London borough, including the one on Railton Road, north of Herne Hill station.

Some residents claimed to be trapped by the planters that blocked vehicle access on the sidestreets that feed Railton Road. But Giles Gibson, a business consultant and cycle campaigner, says that “access to every single front door has remained as it was”.

Retailer Liam Plowman agrees. He delivers in the LTNs close to the Herne Hill off-licence Wild + Lees he has run with his wife Claire since 2016. “Driving now takes slightly longer, but I can drive to every address I could before,” he says.

And Sarah Berry, voluntary co-chair of the Lambeth branch of the pedestrian organisation Living Streets, was encouraged to finally buy a bike – she hadn’t previously cycled in London.

“When the LTN came in, it was ‘right, I’m out of excuses’. I went out and bought a bike on the same day.”

It’s been a revelation. “I still haven’t gotten on a bus or a train or the tube since March. If I had been confined to only the areas I could walk to over the past six months, I’d be feeling a lot more isolated right now.”

o This article was amended on 16 November 2020 to correct the surname of Gem chair, David Hunter; not Butler as an early version said.