Footage that appears to show newborn piglets lying in faeces, pigs with pus-covered wounds and pig carcasses in varying states of decomposition has been published by animal welfare campaigners in Spain.

Spain is expected to overtake Germany this year as the EU’s biggest pork producer. In 2019, a record 53 million pigs were slaughtered across the country, fuelling demand for products such as chorizo, tenderloin and lard across the EU and around the world.

The photos and videos, recorded during undercover visits in 2019 and 2020 to more than 30 pigs farms across Spain, were published by Tras los Muros, which translates as Behind the Walls, a personal project launched by Spanish photojournalist Aitor Garmendia. Tras los Muros said the farms were in the Spanish regions of Aragon, Castilla-La Mancha and Castilla y Leon, home to around 17% of the country’s more than 86,000 pig farms.

Some of the pigs they found appeared to be “severely injured”, said Garmendia, who led the undercover team, and were thought to be showing signs of issues such as “hernias, abscesses, prolapses, arthritis or necrotic tissue”.

Spain is expected to see a boom in demand for its pork as Germany reels from export bans put in place on its meat following the discovery of cases of African swine fever among wild boars in the country. Turnover in the Spanish pork industry passed EUR15bn (GBP13.4bn) last year.

Segments of Spain’s industry have proved resilient even as the Covid pandemic ushered in a deep recession and sent the price of black Iberian pigs plunging, with consumption of fresh pork surging 8% in the first seven months of this year.

In an attempt to confirm whether these were isolated events, Tras los Muros campaigners said they entered some of the farms more than once. After observing numerous pig carcasses in one facility, a follow-up visit three months later found them lying in the same spot. “Nobody had taken them away,” said Garmendia.

Brussels-based NGO Eurogroup for Animals, which was not involved in recording the footage, said the images appeared to show several violations of EU regulations.

“These images testify to an enormous amount of suffering that should be prevented or mitigated, according to EU law, by good husbandry practices and common sense,” Elena Nalon, the group’s senior veterinary adviser for farmed animals, said in an email. 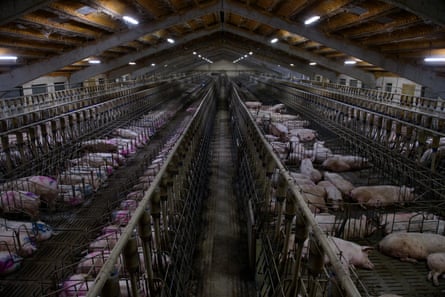 All of the pigs seen in the footage are tail-docked, she said, referring to a measure that involves amputating all or part of the pig’s tail to try to protect against pigs biting each other’s tails, but which has been shown to cause acute trauma and pain. Routine tail-docking is illegal under EU law.

Spain’s pork industry has in recent years been buttressed by millions of euros spent by the EU on promoting pork. More than EUR5m was pledged for a campaign approved by the European commission in 2019 aimed at tackling “controversies on the sustainability of pork meat and animal welfare”. Targeting people under the age of 35, the three-year campaign aims to “inform the consumer about the reality of production in the entire pork chain”.

Trade body Interporc, which represents Spain’s white pig sector, described the footage captured by Tras los Muros as out of sync with the reality of the sector. “The illegal assaults on Spanish farms are aimed solely at damaging the sector using out-of-context images that do not correspond to the reality of our country’s more than 80,000 pig farms,” it told the Guardian in a statement.

Should any farm fail to meet the necessary standards of animal welfare, it is in the sector’s own interest to ensure authorities take action, Interporc noted, citing an email account set up earlier this year to allow the public to lodge complaints. “But any possible, isolated incident cannot be considered to be the reality of the sector,” it added.

The most recently available figures on inspections carried out across Spain’s more than 300,000 livestock farms date back to 2016. That year saw 11,195 inspections carried out, with noncompliance detected in 19% of visits, according to a 2018 response to a written question in parliament. Spain’s ministry of agriculture did not respond to a request for comment.