Country diary: slow growth on the edge of oblivion

Corbar Woods holds a cluster of wonderful yew trees running round the top of an old 18th-century quarry. Nature has softened the vertical faces into a series of steep-sided but curved hollows, and the yews cleave to the edges, creating a permanent arcade of dense shadow. It gives the wood a gothic quality that the trees reinforce by throwing out a network of writhing root stocks. In one spot, more than 40 such stems snake and interlace over a great earth mound, in part, presumably, to give tensile support to the main trunk. But they remind me of those rather insidious liquid shapes performed by strangler figs when they surge in slow motion to engulf their arboreal host.

Richard Williamson notes in The Great Yew Forest how the “wood of the yew stems seems more fluid than others”, and flows around obstacles to envelop them. This pliability partly explains the yew’s legendary status in longbow manufacture, but it goes hand in glove with its almost steel-like strength. In fact, it is claimed that if a yew stake were rammed in the ground with an iron pole, it would last longer. The oldest wooden haft on a human instrument is of yew and thought to be 250,000 years old. Old yews also grow about as slowly as iron: one tree in Crowhurst, Surrey, was said to have put just nine inches on the waist over 250 years. 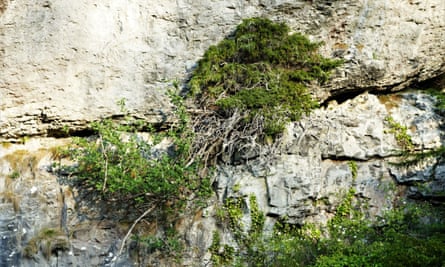 Derbyshire yews achieve another impressive feat by growing directly out of pure rock. My favourite is in Chee Dale. It thrusts out of a cleft that’s 10 metres high in the canyon wall, where a thrush must have once perched to eject a yew seed about a century ago. Then the bird flew off, leaving its turd to make its own luck. In the interval a yew has sent out a witch’s broom of iron-grey roots, but here they spread into vertiginous thin air. Overhead, it has clambered across the cliff to create a glorious circle of emerald. Strange, perhaps, but I think of the plant as a kind of hero: of its life of slow growth until it flourishes as this magnificent coat of arms to photosynthesis – yet its every day passed on the very edge of oblivion.