Britain has thrown its weight behind a new global agreement to tackle the plastic pollution crisis, which Lord Goldsmith said would go “far beyond” existing international agreements.

This week, the Guardian revealed there is growing support for such a treaty internationally, but that neither the UK nor the US, the world’s biggest per capita producers of plastic waste, had yet pledged their support.

The minister for Pacific and the Environment said on Wednesday he believes it is time to start negotiations on a UN treaty on plastics similar to the Paris agreement on the climate crisis. He suggested the UK could provide a leading role in negotiating the terms of such an agreement, as it had with the leaders’ pledge for nature.

Speaking via Zoom at a virtual World Trade Organization event, hosted by the UK in collaboration with the Global Plastic Action Partnership, Goldsmith said: “Plastic in the ocean is set to treble by 2025. The challenge we face is immense and urgent. We believe its time to negotiate a new global agreement to coordinate action on marine plastic litter and microplastic, one that goes far beyond the existing frameworks. With two-thirds of UN member states already on board we have a chance now to create an unstoppable momentum to tackle plastic pollution in a way that the Paris agreement has done for climate change and the Montreal protocol has done for ozone depletion. I hope many, many other nations will join us as well.”

He spoke of the “ambitious” leaders’ pledge for nature signed in September by 64 world leaders from five continents including Emmanuel Macron, Angela Merkel, Justin Trudeau, Jacinda Ardern and Boris Johnson. 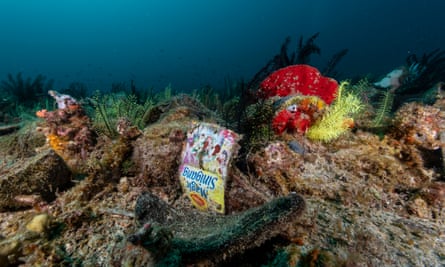 “I’m proud that the UK played a big role in strengthening that pledge, insisting on the strongest possible language, line by line,” Goldsmith said.

The UK will be hosting the G7 and the all-important Cop26 in 2021, he said, and it is committed to doing all it can for nature and to “turn the tide” on plastic waste.

Tim Grabiel, a lawyer at the Environmental Investigation Agency, welcomed the UK’s support for a plastics treaty and hoped that the US and Canada would follow its lead. He said: “The UK government is well positioned to lead global efforts and throw its political weight behind an issue so close to the hearts of the British public.”

The UN environment assembly concluded in 2017 that the existing international legal framework governing plastic pollution, including the Stockholm and the Basel conventions, is fragmented and ineffective.

More than two-thirds of UN member states, including African, Baltic, Caribbean, Nordic and Pacific states, as well as the EU, have said they are open to considering the option of a new agreement. Britain had been considering one of two options: supporting increasing calls for negotiating a new global treaty, or strengthening existing agreements to reduce plastic waste. The US has so far opposed an international agreement on plastic waste.

At a UN working group last week to discuss the crisis, which will feed into the fifth UN Environment Assembly in 2021, several delegations voiced support for a new global agreement, although there was no consensus on whether it would address only marine plastic litter or go further to tackle plastics pollution as a whole, and whether it would be legally binding.