Police are investigating I’m a Celebrity … Get Me Out of Here! over concerns non-native wildlife could have escaped into the Welsh countryside during bushtucker trials, the Guardian can reveal.

Rural crime officers from north Wales police are looking into complaints that non-native creatures such as cockroaches, maggots, spiders and worms could threaten wildlife in the 100-hectare (250-acre) estate surrounding Gwrych Castle in north Wales, where the show is being held this year.

Normally, the show is hosted live from the Australian jungle, where celebrity contestants take part in dares and challenges with live animals, like being covered in insects or surrounded by rats.

Authorities are investigating ITV after complaints by the TV presenter and naturalist Iolo Williams, who was appalled after watching the show last week and seeing thousands of cockroaches being poured over contestants. He described it as “madness” to use non-native species for entertainment.

“I’m not sure which species they’re releasing, but I can tell you they’re not native. We don’t have those cockroaches here in the UK and we certainly don’t have them in north Wales,” he said.

Although the challenge happens in a contained environment, contestants would still be carrying insects when they left the enclosure, said Williams. “There are going to be cockroaches in every nook and cranny along their bodies, you’re going to tell me that every single one of those is found immediately? Of course it’s not.”

ITV said all of the insects used on I’m A Celebrity were non-invasive species, but declined to comment on which species were used. A spokesperson said: “They are only ever released in a contained area and collected immediately after filming. They are all purchased commercially within the UK and are normally bred as animal food.”

While not all non-native species are invasive, some can permanently change ecosystems and are one of the five main drivers of biodiversity decline, according to the UN. Gwrych Castle woods is a site of special scientific interest (SSSI), meaning it is home to some of the country’s rarest species or habitats. Half a kilometre away from the castle is another SSSI managed by the Woodland Trust, called Coed y Gopa, an ancient woodland home to ospreys and goshawks. 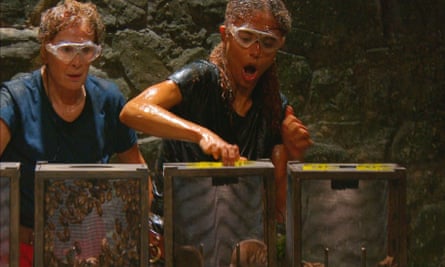 The Springwatch presenter said it was particularly ridiculous considering it has so far been impossible to release beavers in Wales – even though they used to be a native species.

Williams said: “Cockroaches are the ultimate survivors, and if they survive in north Wales and escape into the wild there, what effect are they going to have? I don’t know, nobody knows … I just find it incredible that they’re allowed to do this, and I’m not being a killjoy here. Why not use fish guts, or offal?”

Natural Resources Wales, which gives out licences for the release of species, did not receive an application from ITV to release non-native species. If these species have been released without a licence it would be a breach of the Wildlife and Countryside Act.

A spokesperson for north Wales police said: “The matter is being investigated by officers from our rural crime team.”

I’m a Celebrity has also faced complaints from the RSPCA. Last week the charity raised “serious concerns” about the welfare of animals being dropped, handled roughly and crushed by contestants on the show. It is concerned viewers may try to copy bushtucker trials at home, during which animals have been killed “for no other purpose than entertainment”.

“We feel that deliberately portraying certain species as nasty or frightening or as objects that can be used purely for entertainment rather than sentient, living creatures sends out totally the wrong message,” the charity said in a post on its website.

ITV said the programme “complies with animal welfare law concerning the use of animals, and we are proud of our exemplary production practices”.

Congress is about to pass a historic climate bill. So why are oil companies pleased? | Kate Aronoff

Rivers brought me heart-shattering loss – then gave me a home