Meet the South Poll cow: the healthier, naturally raised cattle of the future?

Missouri rancher Greg Judy spots a six-month-old South Poll heifer calf in his herd that is a prime example of what he calls a “good doing cow”. A cow that will “do good” on grass alone.

She’s got a “big butt”, Judy says, meaning wide hips that will help her easily bear calves when grown. She sports a shiny, slick red hide that flies avoid landing on; cows stressed from fly bites – Judy has seen hundreds on a single cow – don’t grow well. She has a large “barrel” or gut, meaning enough stomach capacity to store large amounts of grass, which she will convert to energy and will keep her in good health, even during the winter with no extra feed. “This is the kind of heifer you want,” Judy says. “You can build a herd out of those.”

Judy raises cattle in a highly-managed, grass-only system that he believes is better for his cows and the environment. His 300-plus herd is kept together in a dense group, and moved often – Judy moves his cattle twice a day to fresh paddocks – creating a symbiotic relationship between cows and grasslands that soil scientists are finding encourages soil health and rapid grass growth.

But Judy has learned not all cows thrive on grass alone, especially the type of cattle favored by a US ranching industry that has grown largely dependent on feeding cattle grain rations.

In Judy’s system, those “common cows”, as he calls them, looked like they had been starved six months after he put them on a grass-only diet. Instead, Judy found success – after nearly going bankrupt in 1999 trying to raise cattle the conventional way – utilizing intensive, grass-based management with cows that had the “grass genetics” to thrive. 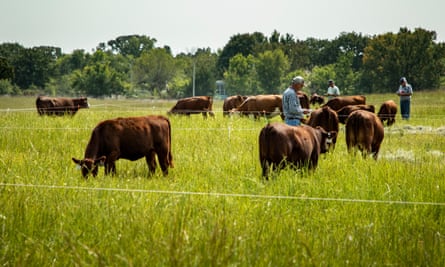 “At the end of the day, the money comes from animals that can excel on a grass diet,” says Judy, referring to the lower costs of raising cattle with a genetic predisposition to thrive on grass, since they don’t require the grain, growth hormones and antibiotics often used in traditional cattle ranching.

It’s a counterintuitive problem, considering cows evolved to eat grass. But today, approximately 97% of US beef cows spend the last four to six months in confined feedlots where they are fed grain rations until slaughter. Before that, they spend most of their lives out on the pasture, but even then some ranchers feed them grain to keep their weight up through winter or during stressful times like calving.

Meanwhile, the grass-only beef market is small, but growing rapidly, according to a report by Stone Barns Center. The intensively managed grazing Judy employs is a supercharged version of traditional cattle-grazing techniques. By moving his cows often, they do not have a chance to damage the grass by eating it too short. Instead, they encourage healthy root development increasing soil health, which some scientists have found allows the soil to capture and store carbon from the atmosphere – a process known as carbon sequestration.

But the growth of regenerative grazing systems has been slow, in part because, as the cattle industry turned to feeding grain, ranchers ended up breeding fewer cows that could thrive on grass alone, says Richard Teague PhD, a range ecologist with the Texas A&M University Agrilife Research center. Ranchers like Judy were put in a pickle, without the cows appropriate for their grass-only systems. 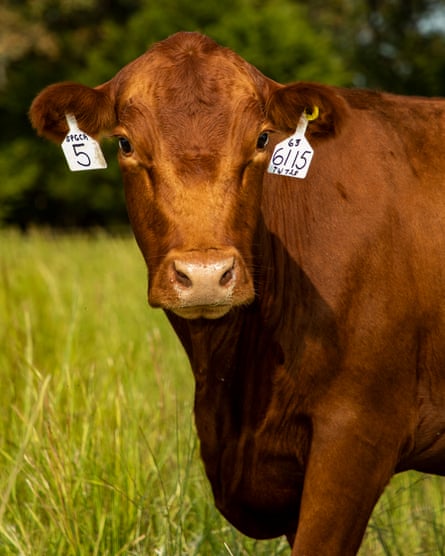 “People wanted to feed corn, [so] they bred huge animals that require very big inputs of corn and also pharmaceuticals,” says Teague. He argues that raising “cattle like that” comes at the expense of the health of consumers – and the health of the soil that nurtures them. “We have to go to animals that we know thrive under good management.”

The traditional ranching industry denies the charge that grass-raised cows are better for the climate than their grain-fed product. In a 2017 study by Oklahoma State University researchers found that grain-fed cattle – with their shorter lifespans – resulted in a 18.5 to 67.5% lower carbon footprint compared with grass-finished beef.

Meanwhile, a 2017 report from the Food, Climate and Research Network challenged the idea that grass-fed beef can be good for the environment at all, saying there was no evidence that grazing cattle helps sequester carbon except under the most ideal conditions.

However, Teague argues, “It’s not the cow, it’s the how.” A 2015 study in Georgia of dairy cows in an intensively grazed system recorded eight tons of carbon sequestered per hectare annually. The intensive livestock grazing systems such as Judy uses are one of the best ways within agricultural systems to sequester carbon, according to Teague. “Under decent management, sequestration exceeds emissions, and the better the grazing management, the more it exceeds it.”

For Judy, it comes down to raising cattle in a system that works with nature instead of against it. But to do that, he also had to find the best cattle to thrive in his environment. For him, that perfect cow is the South Poll.

A relative newcomer to the beef cattle scene, the South Poll is a small-framed, stout, highly fertile red cow, well adapted to hot and humid conditions. It has good mothering instincts that have earned it the nickname the “southern mama cow”. The breed also has a rock star – or at least, country music star – cachet; it was originally developed in the 1990s by Teddy Gentry, the bass player for the country music group Alabama.

Judy is far from alone in his enthusiasm for this up-and-coming breed. In mid-September, South Poll cattle fans from all over the US showed up in Copan, Oklahoma, for the annual South Poll cattle auction. The cows are becoming increasingly popular with grass-focused ranchers – especially in the south-eastern and midwestern US where the cattle are best adapted – according to Ann Demerath, secretary of the South Poll Grass Cattle Association. 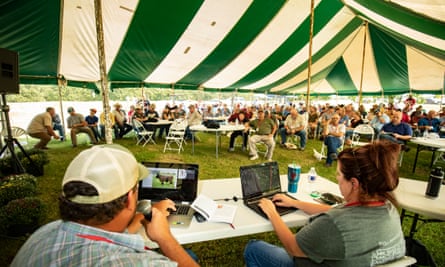 Some of the animals purchased at the auction may be cross-bred with other cattle breeds. Ranchers hope to use the South Poll genes to adapt their existing cattle to do better on a grass diet, Judy says. He advises ranchers to start by purchasing the “best South Poll bull you can afford” and breed it to the best females in their existing herd. Then, ranchers should select the best females from that generation and breed those with a South Poll sire – a technique called “line-breeding” that quickly focuses on desirable traits without risking genetic defects.

Judy also advises ranchers to cull – or remove – any animals that don’t fit their standards for health and disposition, even if they “look at you funny”, from their breeding stock. His mantra? “You’ll never have a herd any better than what you are willing to cull for.”

Relentlessly selecting for the best-adapted cows within his own system has allowed Judy to produce South Poll mother cows so well-adapted that they stay healthy through the winter. That means, unlike most ranchers, Judy can give the mothers more time with their calves during the winter, which gives those calves an extra boost of growth and leaves him with a stronger, bigger calf in the spring.

For Judy, that is the goal – a cow that needs nothing but well-managed grass, passing their health and wellbeing on to the next generation.

Why is England so vulnerable to droughts? – podcast

Grenadian minister Simon Stiell to be next UN climate chief

Up to £60m in UK crops left to rot owing to lack of workers, says NFU