The Indian school where students pay for lessons with plastic waste

Every morning, students in Assam’s Pamohi village go to school clutching a bag of plastic waste, in exchange for which they will get their day’s lessons.

Akshar School, founded by Mazin Mukhtar, 32, and his wife Parmita Sarma, 30, has turned its pupils into ecowarriors by waiving school fees and helping to stop local people burning used plastic.

The village’s toxic bonfires were causing such an environmental hazard, children were coughing and wheezing in their classrooms.

The school was founded to provide an education for children in the area, most of whom were working in the local stone quarries, earning about $3 (GBP2.25) a day. Few of the hard-pushed parents were keen to send an earning member of the family to study. 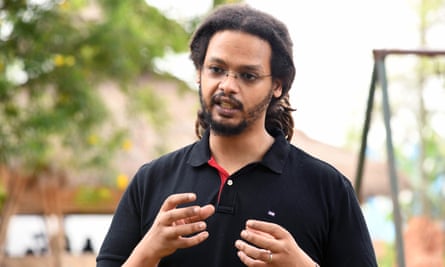 “When we asked the parents to send their household plastic with their children on the school bus, almost none of them complied. They preferred to burn their plastic at home. So my wife told them we would start charging fees. Fees which they could pay in cash, or in plastic waste from their homes,” says Mukhtar.

The alternative school fees policy quickly resulted in 100% compliance from parents who also signed a pledge to stop burning plastic.

To strengthen the bridges being built in the community, the school also offers vocational training. Students are taught how to install solar panels and attend carpentry and electronics workshops, says Muhktar, an African-American who came to India in 2013 from New York to work on a school project in Assam where he met Sarma, a student of social work at Guwahati University. The couple set up Akshar in 2016, raising money to build it and funding from private donors to run it.

From the original 20 students, Akshar now has seven teachers managing 110 children aged from 4 to 15, and a 100-strong waiting list.

“We try to teach students to take responsibility for their surroundings and to strive to improve them,” says Sarma. “As we collect at least 25 units of plastic every week from each student, we are able to muster upwards of 10,000 pieces of plastic each month. These are transformed into eco-bricks for construction. The clouds of toxic smoke from plastic burning which used to plague the school have decreased significantly.” 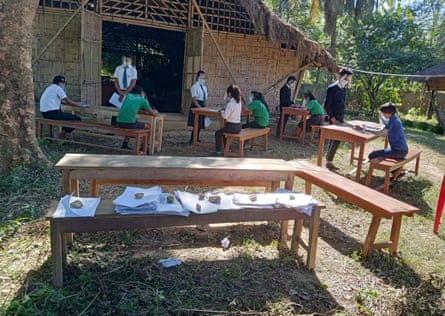 An unconventional way to reduce child labour has also been devised. “As we could never afford to recompense the kids like the quarries, we devised a mentorship peer-to-peer learning model, whereby older kids would tutor the younger ones, and in return get paid in toy currency notes that can be used to buy snacks, clothes, toys and shoes at local shops. As the students progress academically, their salary increases. Our motto is ‘Learn more to earn more’. This monetary incentive has proved to be a powerful motivator for the community,” says Mukhtar.

“The school has had no dropouts in the last couple of years. The older kids are able to make about $60-70 monthly depending on the work allotted. Many have even bought cellphones from their earnings, something their parents still can’t afford to do.”

During the height of the pandemic, classes were held outdoors in full PPE. Lockdown saw the school transformed into a food relief centre. Senior students worked as social workers, identifying need locally and delivering rations to feed about 15,000 people in Guwahati’s slums and villages.

“Students are becoming more aware now. They know that plastic is bad for their health and the environment. They are talking to their parents about these harmful effects, making them aware too,” says teacher Akansha Duarah.

Sompa Boro, mother of Jyoti, 10, and Junali, 15, says they used to attend a private school but had to leave. “We were struggling to pay their fees. Thankfully, Akshar accepted them and we’re very happy with the kind of education they are receiving. Akshar has helped us to think differently, and to change mindsets in a very positive way.”

The school has also transformed the lives of its pupils. “The kids who come to our school are disrespected and abused by society. When they come in, they are full of anger and aggression. But as they study and learn new skills, they become more empathetic, optimistic and confident. In fact we have a 13-year-old who could barely speak when she joined three years ago. But now, she is not only excelling academically but is also tutoring two kids from a local English-medium school in her spare time,” says Sarma. 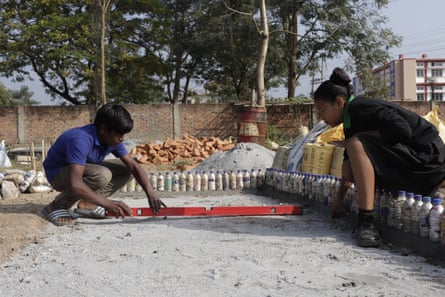 Mukhtar and Sarma have now signed with the Guwahati authorities to implement the Akshar model in five government schools and there are plans to start a sustainable landscaping course.

According to B Kalyan Chakravarthy, principal secretary to Assam’s education department, the Akshar model proves that environmental education can work. “Akshar can be a brand ambassador for the efforts of the education department in Assam to showcase what can and must be done across all schools. The awareness they are creating in society as a whole will contribute meaningfully in our fight against climate change.”

Mukhtar and Sarma are happy that the community is behind them. “The children are learning new things every day. They love coming to school so much that they don’t want holidays,” says Sarma.